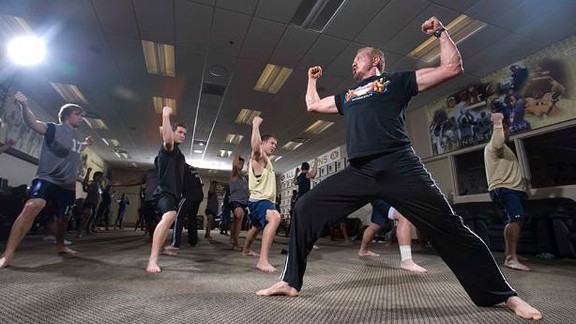 Courtesy of DDPYogaDiamond Dallas Page says of his exercise regimen: "This ain't your momma's yoga."

A 6-foot-5 tattooed former pro wrestling champion does not seem like the type of guy to be doing sun salutations. This is a dude who looks so tough that Rob Zombie cast him as a bounty hunter in the horror flick "The Devil's Rejects."

But the life of former WCW and WWE star Diamond Dallas Page has taken a plot twist straight out of a Monday Night Raw storyline. The self-proclaimed "King of the Bada-Bing" has reinvented himself as a yoga guru.

When Page, 55, unrolls his yoga mat he doesn't shout out his old catch phrase, "Self high-five." But he doesn't offer any greeting along the lines of "Namaste" either. His newest catch phrase: "This ain't your momma's yoga."

"I usually tell my classes that if you want to reach your arms to the heavens and have the universe smile at you, you might be in the wrong class," Page said. The workout takes the basic principles of yoga and blends them with elements of strength conditioning, Pilates and mixed martial arts.

Page swears his yoga practice aided the healing of ruptured L4 and L5 discs in his lower back and allowed him to continue wrestling. Today he says yoga has put him in better shape than during his years in the ring.

He doesn't rule out a return to WWE and a recent agreement has led to him being a character in the latest WWE video games.

But, for now, he's focused on a different kind of mat.

High-profile friends like "Dancing With the Stars" alum and WWE star Chris Jericho have used Page's yoga theories to keep them sharp and work through injuries. That's in addition to the dozens of regular-guy testimonials that go with a host of products on his website, DDPBang.com.

"P90X and Insanity are awesome workouts for young guys who aren't beat up," Page said. "DDPYoga is for guys who are beat up. It's the fountain of youth for beat-up guys."