Alabama freshman Jack Blankenship has seen the giant heads that fans hold up at basketball games. Usually they're photos of celebrities or tributes to their team's players.

But he decided he knew a better way to distract opposing players.

"I thought it'd be cool to find a way to get a picture of myself and bring it to the games and hold it up," Blankenship said. And people noticed. 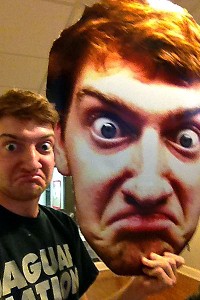 At his first game with the giant likeness, ESPN2 announcer Pam Ward highlighted Blankenship in the stands. "This guy ... who does that? I mean, who makes a picture of themselves?" Ward asked.

"My friends were calling me, saying I was on ESPN2," Blankenship said, excitedly. He popped up in other places. One screen grab from the game has attracted more than 680,000 views.

In only his second game on Tuesday night, he was captured by Birmingham News photographer Hal Yeager and was shown on the paper's website under the headline, "Is this the SEC basketball photo of the year?"

The facial expression that seems to stop everyone has its own name. It's called, amazingly enough, "The Face."

"I know. That's creative," Blankenship said. "It's actually a big inside joke with all my friends, since like seventh grade. We have, like, thousands of pictures of us doing it."

The question now is how does a college freshman top his Internet fame after only two games?

"I was thinking about getting my friends to all print out the same face and have them right next to each other. All four of us," he said.

Blankenship is sure to have a few tricks up his sleeve. His Twitter bio: "Publicly embarrassing myself since 1992."

The Tuscaloosa native said he would love a career as a comedian.

"I am trying to start my own stand-up comedy club at Alabama for charity," he said. "It's a career I'd like to pursue but probably won't happen, but I can always dream."

But for now, he's got a lot of momentum awfully quickly.

"It's been amazing," Blankenship said. "I've always wanted to be famous."