Joe Flacco: Best quarterback in the NFL is Joe Flacco 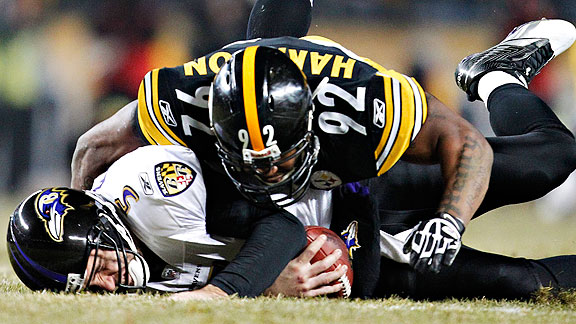 AP Photo/Gene J. PuskarAs soon as he gets up from this bone-crunching hit, Joe Flacco will be happy to tell you how good he is.

Quick. Name the top five quarterbacks in the NFL.

Bad news. You failed both questions. Because the best quarterback in the NFL is Joe Flacco. The Ravens quarterback has been trying to tell you about his greatness for eight months. You need to start paying attention.

Joe Flacco, July 27, 2011: "I think I'm pretty damn good. I don't need to go out and tell everybody that and show it on every given Sunday."

Joe Flacco, Jan. 11, 2012: "If you look at the teams that won, yeah you can look at the quarterbacks, but that's just because you guys, ESPN, everybody wants to pump them up as being the best quarterback that year. ... You guys want everybody to be Aaron Rodgers and be Tom Brady, but you guys do realize, those guys' [teams] don't run the ball? If we try to do that, the criticism that we'd take around here would be ridiculous. ... You guys want an elite quarterback. You have to stop complaining when we go out there and throw the ball 60 times a game."

Joe Flacco, Jan. 14, 2012, on the perception that he played poorly in Baltimore's 2011 playoff loss to Pittsburgh (Flacco was 16-for-30 for 125 yards with a touchdown and two turnovers): "I played well all year, I played well in the playoffs and I played well in that game, I thought."

So remember, don't use your eyes or even look at stats when considering who the best quarterback in the world is. Just ask Joe Flacco. Oh, I forgot. Also don't ask his teammates.