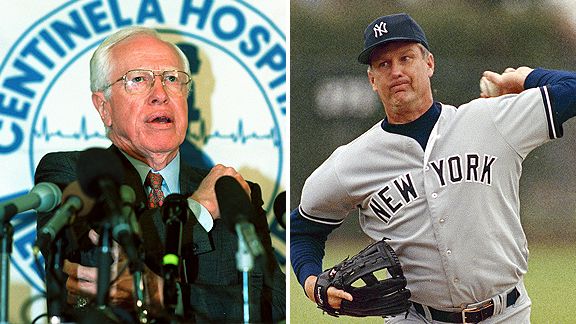 Tommy John surgery -- the colloquial name for ulnar collateral ligament reconstruction -- is a surgical procedure that aims to repair ligaments in the elbow. The procedure has become synonymous with sports medicine, particularly in baseball, because pitchers can cause damage to the ligament, which is located on the inside of the elbow joint.

The UCL is the ligament that creates the stability which allows the high-stress action of throwing a baseball. Athletes are especially prone to tear the ligament because it becomes more frayed after heavier-than-normal wear and tear, especially through repetitive motion. In the case of a pitcher, the action of throwing overhand can prove incredibly hard to maintain on a deteriorating UCL.

The procedure has become known as Tommy John surgery because he was the first professional pitcher to successfully undergo the procedure, in 1974. That 1974 operation was done by Dr. Frank Jobe, who is considered a pioneer in the sports-medicine field thanks to his work.

When John's surgery was completed in 1974, Jobe gave the player a 1 in 100 chance of making a successful return. Today the recovery rate is almost 85 percent. In 2003, USA Today reported that in the previous two seasons, 75 of the almost 700 major league pitchers had undergone Tommy John surgery -- almost one in nine. With 288 career wins, Tommy John remains the winningest pitcher to have undergone the surgery that bears his name.

The objective of Tommy John surgery is to reconstruct the ulnar collateral ligament. To do so, doctors create a 4-inch incision on the inside of the elbow joint. Surgeons then replace the damaged UCL with a tendon from somewhere else in the body -- usually the forearm, but it also can be taken from a hamstring, knee or foot. The replacement tendon is called an autograft.

In order to get to the UCL, surgeons split and retract the flexor muscles in the forearm -- a much less invasive procedure than was attempted in early surgeries. By doing this, there is no need to completely reroute the UCL (running it through the front of the elbow joint rather than behind) unless there was significant nerve damage before the surgery.

When inserting the autograft, most surgeons use one of two techniques. Drilling small holes in the arm bones, doctors can thread the new autograft into the elbow using either a docking -- triangle -- pattern or a figure-eight. In the docking method, doctors will tie the two ends of the tendon-stitching togethe with proper tension in the elbow. When the tendon is inserted in a figure-eight, the two ends of the tendons are stitched to its base.

Possible complications can arise during the surgery, most significantly nerve damage. It is possible to further harm the ulnar nerve if the surgery is done improperly, and this can result in a loss of full motion in the ligament's joint. Other possible risks associated with most surgeries include infection or poor reaction to anesthesia.

Also, about half of the athletes who undergo the surgery experience a 5-10 degree loss in the range of motion in their elbows, which sometimes means they cannot fully straighten their arms. That does not usually negatively affect their throwing motion.

Recovery from Tommy John surgery typically takes 12-18 months for pitchers. A pitcher usually can return to full range of motion within two months, and usually can begin throwing again after six months. In rehabbing after surgery, doctors stress that it is important to not take shortcuts in hopes of a shorter absence from the game; instead, it is better to go through the process fully, which encourages a longer career. Some believe that more than half of the solution for an elbow injury comes from the rehab, not the surgery itself.

Rehabilitation usually includes hand-grip and shoulder-and-wrist mobilization exercises within the first few weeks after the surgery. Eventually, the athlete does strengthening exercises for the entire arm. After about four months, sport-specific training can begin.

For athletes, the chances of a complete recovery range from 85-90 percent. The entire process takes at least a year for pitchers, and closer to six months for position players (even then, it could take a pitcher another year before he returns to his pre-surgery form). A player is considered healthy when he feels no pain when throwing, has full shoulder and elbow range of motion, normal forearm strength, and good throwing biometrics.

Some pitchers have reported throwing better after the surgery than before, but most doctors consider the idea that Tommy John surgery makes a player into a better pitcher to be a myth. Part of the explanation for better velocity comes from repairing simple wear and tear in the UCL: the pitcher then has a brand-new, non-deteriorated tendon in its place, so he likely will throw at the velocity he did before his UCL ever began to deteriorate. Doctors also believe the extensive rehab and conditioning players go through after the surgery could improve a pitcher's abilities and fitness. 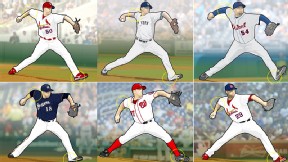 Stephen Strasburg is another in a long line of aces to undergo Tommy John surgery, yet the baseball industry isn't doing anything about it. Story » Cameron: Will Strasburg be the same?

Before and After Tommy John Surgery (in 1974)

NOTABLES WHO HAD TOMMY JOHN SURGERY