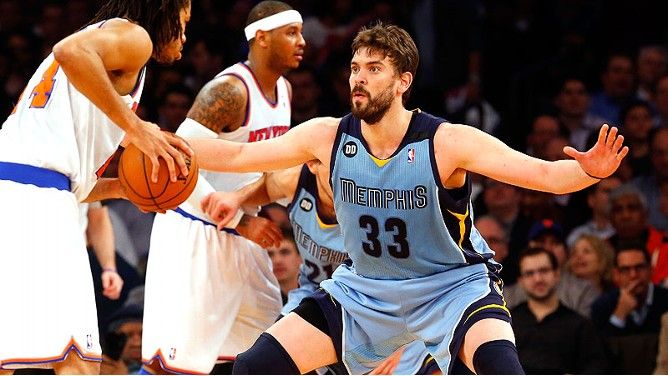 Gasol earned his first Defensive Player of the Year award by anchoring the NBA’s stingiest defense.

Since the 1982-83 season, when the first Defensive Player of the Year award was given, a power forward or a center has won it 22 of the 30 times.

Since 1996-97, Gasol is tied for the fourth-highest defensive efficiency among Defensive Player of the Year award winners.

Defensive efficiency
By Defensive Player of the Year winners

The Grizzlies’ defensive efficiency was 95.4 with Gasol on the court. However, with him on the bench, that number jumped to 102.2.

With Gasol on the court, teams turned the ball over against the Grizzlies 17.3 percent of the time, a rate that would have led the NBA (the Clippers' 17.2 percent led the league this season). However, with him off the court, that percentage dropped to 15.8 percent, which would've ranked 12th.

According to basketball-reference.com, Gasol had 5.4 defensive win shares this season, which was second in the NBA behind Paul George. Defensive win shares are an estimate of the number of wins contributed by a player due to his defense.

The second half of the season was when Gasol really earned the honor. Gasol’s defensive efficiency after the All-Star break was 92.1, which was best in the NBA.

As an on-ball defender, Gasol led the NBA with his 0.76 points per play allowed per game (minimum 800 plays, 55 players). Players turned the ball over an average of 14.5 times per game when covered by Gasol, sixth best in the league.