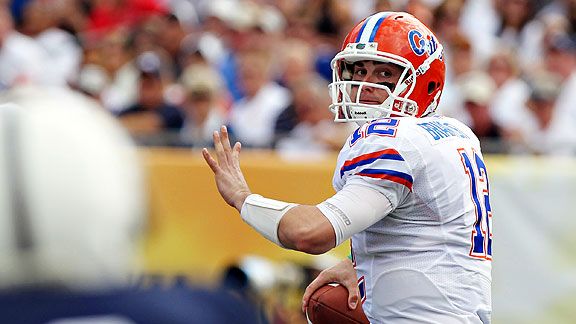 John Brantley looks to improve his game under the tutelage of offensive coordinator Charlie Weis.

Weis’ newest task is to turn around the career of Florida quarterback John Brantley. Brantley was the 2006 Gatorade Player of the Year and the 25th-ranked recruit in the 2007 ESPNU 150. He spent his first three seasons in Gainesville as Tim Tebow’s backup, until he finally got his chance to start in 2010. The results were not what Brantley and Gators fans had in mind.

In 13 games, Brantley threw just nine touchdown passes and 10 interceptions, and Florida finished 8-5, its worst record under Urban Meyer. Worst of all, Brantley struggled in the Gators' biggest games, finishing with one touchdown and five interceptions against Florida’s four ranked opponents.

With Brantley now playing in Weis’ quarterback-friendly system, many are wondering if his game will progress similar to that of Quinn in 2005. In his first season with Weis, Quinn threw 15 more touchdowns and three fewer interceptions than in the previous season. His passing efficiency rose by nearly 33 points.

If Brantley is going to make a similar leap, he will need to improve in two key areas. First, he needs to get better on early downs, especially first down.

First down is the best time for quarterbacks to throw: the average passing efficiency for an FBS quarterback is 9.1 points higher on first down than any other down.

Defenses typically play their base personnel and coverage, so quarterbacks tend to have a good idea what is coming. Yet, first down is where Brantley has his lowest passer efficiency.

Last season, he ranked 113th in the nation in first-down passing (minimum 50 attempts) with just two touchdowns and three interceptions. The good news is Brantley should get plenty of chances to turn it around. During the Weis era (2005 to 2009), the Notre Dame Fighting Irish threw the ball 47.9 percent of the time on first down, ninth most in FBS over that stretch.

Throws of 10+ Yards on First Down

The other area where Brantley needs to improve is with his touch on the deep ball.

Last season, Brantley completed just five of his 24 throws of 20 yards or more with only two completions against SEC opponents.

Brantley has a tendency to overthrow his target with 41.7 percent of his deep passes going long. Weis’ offense should again provide opportunities for Brantley to showcase improvement. In 2009, Jimmy Clausen averaged four throws of 20 or more yards per game, including 11 against the Michigan Wolverines.

If Brantley can resolve his first-down woes and struggles with the deep ball, he just might be the latest collegiate pupil of Charlie Weis to cash in at the NFL draft.