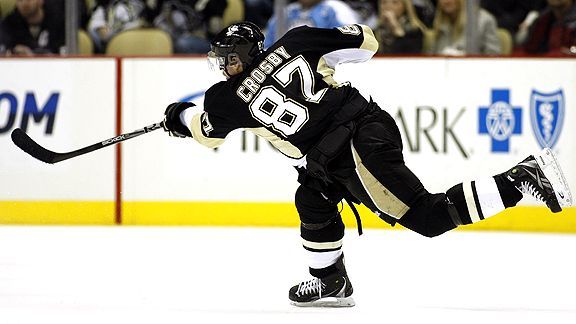 With two Stanley Cup Final appearances and one Hart Trophy, Sidney Crosby has meant everything to the Penguins.

Sidney Crosby was having an amazing season when he was hit by Tampa Bay Lightning defenseman Victor Hedman on Jan. 5, 2011 and suffered a concussion. On Wednesday, Crosby announced he has no timetable to return to the ice, but says it's "likely" he'll return sometime this season.

But that game against the Lightning would be the last anyone saw Crosby play last season.

Crosby was on pace for 132 points, which would have been the most in a single season since former fellow Pittsburgh Penguins greats Jaromir Jagr and Mario Lemieux had 149 and 161 points, respectively, in 1995-96.

Finishing with 66 points in 41 games was still an amazing accomplishment. Among those who played in 41 games or fewer, it’s the second-most points in a single season trailing Hockey Hall of Famer Bill Cowley, who had 71 points in 36 games in 1943-44. The difference being the NHL had a 50-game season when Cowley played compared to 82 games now.

While the Penguins went 23-13-5 after Crosby’s departure, their offense took a nosedive. Pittsburgh averaged 2.34 goals per game, which ranked 25th in the NHL. The Penguins’ faceoff win percentage was 26th at 47.4, and their power play ranked dead-last at 14.0 percent.

The statistic “point shares” is an estimate of the number of points contributed by a player both on offense and defense -- similar to baseball’s “win shares” created by statistician Bill James. According to hockey-reference.com, Crosby’s 68.8 point shares is third in the NHL since 2005-06 behind only Alex Ovechkin (81.6) and Nicklas Lidstrom (72.0).

Excluding his rookie season, when Pittsburgh did not make the playoffs, the Penguins have a .624 points percentage since 2006-07 with Crosby in the lineup. He has the highest points per game among active players at 1.39. Only Wayne Gretzky, Lemieux and Mike Bossy have higher points per game averages in NHL history.

Crosby has collected 336 points at even strength, the most in the NHL since entering the league in 2005-06. Crosby ranks first despite playing 1,129 fewer minutes than the leader in even-strength minutes, Joe Thornton of the San Jose Sharks.

The website behindthenet.ca, which examines a player’s value while on and off the ice, puts more perspective on just how amazing Crosby was last season. He averaged 3.98 points per 60 minutes in 5-on-5 situations, by far the highest among forwards last season. Over the last four seasons, the only forward with a higher mark was Daniel Sedin at 4.04 in 2008-09.

Crosby has become the face of the league and everything he has done since the moment he stepped on the ice backs that up.