Mark Cuban is not going to be the new owner of the Chicago Cubs. The Tribune Company, which is selling the team, knows it. MLB commissioner Bud Selig knows it. And I'm guessing even Cuban himself knows it. 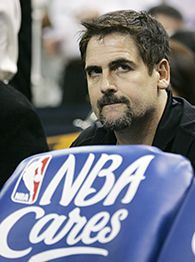 Nobody will come right out and say it, but Cuban is going to get blackballed by the old boys baseball frat house of Phi Gonna Lie. In "Animal House" terms, Cuban is Eric "Otter" Stratton, Selig is Dean Vernon Wormer, and longtime Cuban antagonist Jerry Reinsdorf is Doug Neidermeyer.

It isn't a matter of money. Cuban has money. He could buy the Cubs, Wrigley Field, and the Tribune's 25 percent stake of a local sports cable channel -- total price tag: an estimated $700 million-$1 billion -- and still have more than a billion dollars of net worth left in his money clip.

It isn't a matter of business sense. Cuban is a self-made man, an American success story who isn't against lots of commas and zeroes on a profit sheet. You don't become the 407th-wealthiest person in the world (according to Forbes Magazine) just because you can tango.

And it isn't a matter of sports savvy. Cuban turned a dog with fleas -- the Dallas Mavericks -- into one of the NBA's Best of Show. Since Cuban bought the the team in 2000, the Mavs have become one of the top revenue producers in the league and increased its value from $285 million to about $400 million.

"I happen to make the personal choice to reinvest 100 percent of it into players and organization," Cuban told me in an e-mail. "I don't know why anyone would be upset with that approach."

Upset? Some MLB owners aren't upset, they're mortified. Terrified. Petrified. The last thing they want is Cuban making them look bad with his reinvestment model.

It will take a three-quarters majority vote -- 22 of 29 -- for Cuban to be approved by MLB owners. There's a better chance of the Wrigley Field ivy being replaced by popcorn strings than there is Cuban getting those 22 votes. He will become the victim of politics, grudges and inertia.

Selig has made it clear he prefers local ownership. Sure, makes sense. Except that the Cubs have been locally owned for decades and have exactly zero World Series championships since 1909. So maybe it's time to try something else.
Anyway, you don't have to worry about Cuban being an absentee owner. Ask the Mavs or NBA refs how absent he is. The guy becomes more attached to his teams than barnacles to a ship hull.

Cuban already has said his regular spot at Wrigley wouldn't be on luxury suite row of the stadium's mezzanine level, or in the plexiglass-protected seats (preferred by Trib execs) next to the Cubs' on-deck circle. Instead, Cuban has picked out some space in the right-field bleachers. For some reason, I don't see apparent bidding front-runner John Canning Jr., who just happens to be a Selig buddy and an investor in Selig's old team, the Milwaukee Brewers, sitting shirtless as a Bleacher Bum.

It also doesn't help Cuban that Selig is influenced by the advice of Reinsdorf, who is chairman of the Chicago White Sox and the Chicago Bulls. And isn't it interesting that billionaire Sam Zell, who is taking Tribune Company private, is an investor in Reinsdorf's Bulls and White Sox.