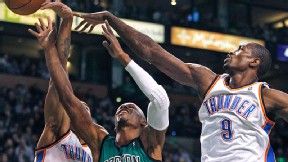 Paul Pierce can't finish in traffic vs. the Thunder.Celtics coach Doc Rivers wondered out loud after Monday's loss to the Oklahoma City Thunder just how many point-blank looks his team missed.

"It’s in the teens, for sure," declared Rivers. "I mean, layups and point-blank looks tonight. And we’ll show them that, because that’s actually a positive thing, not a negative thing. Obviously you want to make them, but the fact that you’re getting them -- they need to see that.”

Yes, it was a case of good news, bad news for Boston.

According to analytical site HoopData, the Celtics attempted a season-high 33 attempts at the rim Monday, but missed 15 of them. For the season, Boston is 154 of 255 at the rim, a 60.3 percent clip, ranking them in the bottom third of the league overall.

Dig deeper and the numbers are even more cringeworthy.

According to Synergy Sports, the Celtics rank 29th in the league averaging a mere 1 point per play around the basket (in non-post-up situations). In fact, the Celtics have connected on a mere 47.9 percent of those shots (104 of 217 overall). For comparison's sake, the Miami Heat average a league-best 1.286 points per play around the basket, converting a whopping 62.3 percent of their close-range shots (170 of 273 overall).

For a Celtics team looking for an offensive spark amidst a five-game losing streak, the advice is simple -- finish at the rim.