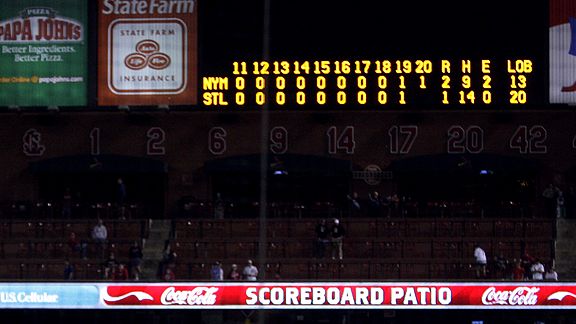 He's a Yankees fan. We'll forgive him for not being totally familiar with Mets history. If you're a Mets fan, you're not just used to heartbreaking defeat. You're used to crazy. Win or lose.

No matter how you slice it, a 20-inning game provides a lot of eye-popping data.

Combined totals for both teams Saturday

* The Mets used 24 players, including everyone except Friday's starter Oliver Perez. Even Sunday starter John Maine was used as a pinch runner in the 13th.

So after all that, is this the craziest game the Mets have ever played?

Then-Braves announcer John Sterling called it "The wildest, wackiest, most improbable game in history," following Camp's home run. He's a Yankees fan, too, from what we know. Wonder how he'd compare that one to Saturday's game?