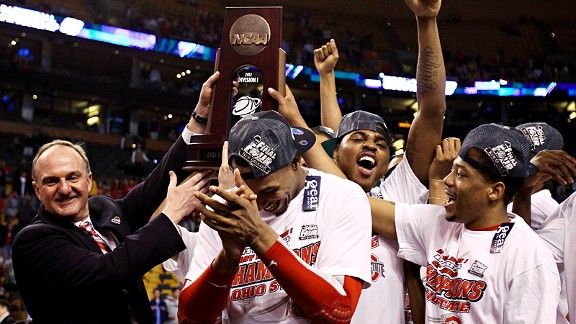 The key to the Buckeyes run to the Final Four has been sophomore forward Deshaun Thomas. Thomas scored a career-high 31 points in the Round of 64 win against Loyola-Maryland, and has averaged 21.7 points in this year’s NCAA tournament.

When the Buckeyes traveled to Lawrence to take on Kansas in December, Jared Sullinger missed the game with back spasms. He’ll be in the lineup in the Final Four for a star-studded matchup with fellow All-American Thomas Robinson.

Sullinger leads the nation with 279 points on post-up plays this season while shooting 47 percent. If the Jayhawks can force him farther from the basket, the advantage shifts their way. Opponents are shooting 27 percent on jump shots guarded by Robinson, third-best among Big 12 players.

While Sullinger is the All-American and Thomas has been the hot hand, it was a lesser-known Buckeye who came out of nowhere to help Ohio State win in the Elite Eight and advance to New Orleans.

Lenzelle Smith Jr. scored just 10 total points in Ohio State’s two games in Pittsburgh as the Buckeyes advanced to the Sweet 16. In the team’s games in Boston, he scored 17 points against Cincinnati and 18 against Syracuse while making three 3-pointers in each game.

Senior William Buford leads the team in shots and 3-point attempts this season. During the NCAA tournament, more than half of his shots have been contested by a defender and he has connected on less than 15 percent of those attempts.

As the competition has gotten tougher, more of Buford’s shots have been contested. In Ohio State’s first two games, only nine of 24 shots were contested. Against Cincinnati and Syracuse, 14 of his 20 shots were over a defender.

Aaron Craft leads the nation with 57 turnovers forced as an on-ball defender this season. No other player in the country forced more than 50.

When the teams met in December, Craft was able to shut down Tyshawn Taylor as a scorer. Taylor scored just 9 points in the game, one of four times this season he was held in single digits.

With Craft guarding him, Taylor had six turnovers and made just one of five shots. The Kansas senior did finish with a career-high 13 assists in the contest.