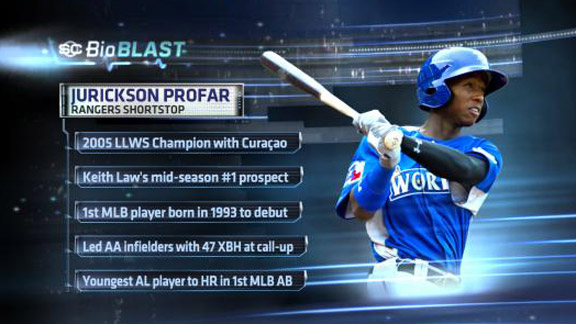 Jurickson Profar is the second-youngest player and third teenager in Major League Baseball history to hit a home run in his first career at-bat. Only 18-year-old Whitey Lockman was younger when he homered in his first at-bat in 1945, according to the Elias Sports Bureau.

At 19 years, 195 days old, Profar is the first teenager and youngest player in American League history to accomplish this feat.

• Profar is the youngest Rangers player ever to hit a homer, breaking Ivan Rodriguez's mark on Aug. 30, 1991 (Rodriguez was 19 years, 276 days old). He’s the third player in Rangers franchise history to homer in his first career at-bat (the first since Brant Alyea in 1965) and the first since the franchise moved to Texas.

• Profar is the youngest player to hit a home run in any game since his current Rangers teammate Adrian Beltre (19 years, 171 days) did so on Sept. 25, 1998 for the Los Angeles Dodgers.

• Profar is the third player this year to homer in his first major-league at-bat. Eddy Rodriguez of the San Diego Padres did so on August 2, a week after Starling Marte homered for the Pittsburgh Pirates (July 26).

• Profar is the first Texas Ranger to homer in his first at-bat, but he’s the third player in franchise history to do so (Brant Alyea, on September 12, 1965, and John Kennedy, on September 5, 1962, both as Washington Senators).

• Profar is the youngest player to hit a home run and a double in a game since Andruw Jones (19 years, 126 days) on Aug. 27, 1996 for the Atlanta Braves. Profar and Jones were both born in Willemstad, Curaçao.

Teenagers With 2 XBH in MLB Debut
Since 1900

• Profar is the second teenager in the Live Ball Era (since 1920) with a homer and a double in his first career game. Only Lockman was younger in 1945.

• In Profar's first at-bat, he had already seen two pitches down-and-in before he crushed a 2-1 90 MPH fastball down-and-in 391 feet for a homer. In his second at-bat, he doubled on a 1-1 88 MPH curveball up in the zone, nearly in the same spot he saw a fastball on the previous pitch. (see pitch location chart below) 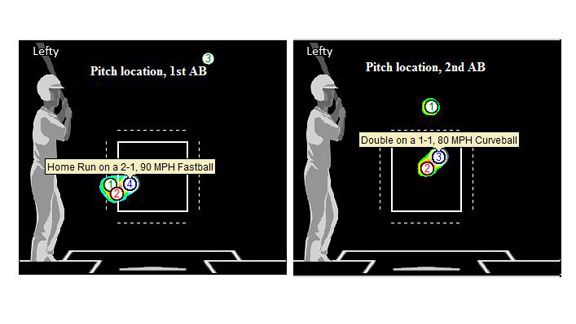