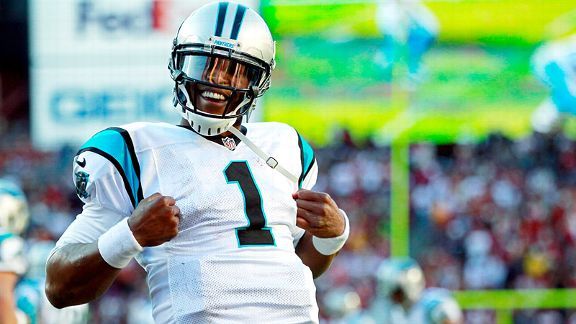 The Panthers are on a win streak due in large part to improved play from Cam Newton.

Following the Carolina Panthers' loss in Week 5, the team dropped to No. 26 in the weekly ESPN.com NFL Power Rankings. Eight wins later, the Panthers are now ranked No. 3, their highest ranking since Week 17 of 2008.

The Panthers have been firing on all cylinders during the win streak, with big contributions from Cam Newton, the defense and Ron Rivera.

Cam Newton’s season may end up being defined by game-winning drives against the Patriots and Dolphins, but he has stepped up his overall level of play during the win streak after a poor start.

Newton has posted a 71.6 Total QBR during the win streak, sixth best in the NFL during that span. He posted a 33.9 Total QBR through the first four games of the season (29th), when the Panthers went just 1-3.

The big improvement for Newton from the first four games to the past eight was his performance against five or more pass-rushers.

Newton has faced such pressure at the highest rate this season (42 percent of his dropbacks) and early on he struggled. In the Panthers’ Week 5 loss, Newton took seven sacks and threw all three of his interceptions when the Cardinals brought five or more pass-rushers. Since that game, however, Newton has thrown only two interceptions and taken eight sacks against such pressure.

In addition to improved passing, Newton has also been carrying the load on the ground. During the win streak, Newton leads the team in rushing (324 yards) and rushing touchdowns (5). Most of his rushing has been done on scrambles, with an NFL-leading 221 scramble yards during the win streak.

The Panthers have allowed a league-low 13.1 points per game this season, which has been bolstered by the 12.4 points allowed per game during their win streak.

This season the Panthers have allowed a touchdown on only 32.1 percent of opponent’s red zone drives (27.8 percent during the streak). Not only is that best in the NFL this season, it’s the best percentage since the league expanded to 32 teams in 2002.

Opponents have reached the red zone 28 times against the Panthers, with nine of those drives ending in touchdowns. The Panthers have held their opponents scoreless on a trip to the red zone seven times.

Last season Ron Rivera was criticized for electing to punt on a fourth-and-1 at the Falcons’ 45-yard line with just more than a minute remaining. The Falcons drove 77 yards on five plays to kick the game-winning field goal after the punt.

This season, Rivera has been “going for it” more frequently, and it has paid off.

During the win streak, the Panthers are 8-of-8 on fourth-down conversions (on seven different drives). One of those attempts ended the game against the Buccaneers in Week 13. The other six drives all resulted in touchdowns.

Six of the conversions have been when the Panthers were either tied or in the lead (all with 1 yard to go). In Rivera’s first 36 games as coach, the Panthers had seven fourth-down conversions when tied or leading (on 10 attempts).