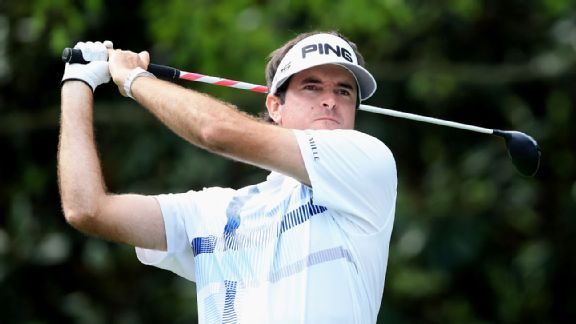 Bubba Watson was in command of his swing all weekend.Two out of three wasn’t bad for Bubba Watson, who won the Masters on Sunday, edging out Jordan Spieth and Jonas Blixt.

Watson is the third player in the last five years to win multiple majors, along with Mickelson and Rory McIlroy

Watson and Mickelson are the only left-handed golfers to win multiple major championships.

This was Watson’s sixth start in a Masters, tying him with Jimmy Demaret and Arnold Palmer for the second-fewest needed for multiple Masters wins. Only Horton Smith (three starts) needed fewer.

Watson fared the same on par-5s at this Masters as he did when he won two years ago -- eight shots under par, which also happened to be his winning score this year.

Watson also limited his bogeys. His nine this year matched his 2012 total.

After needing 33 putts in Saturday's third round (he shot 74), Watson needed only 25 putts on Sunday (69) and didn't have a three-putt.

His 25 putts were tied for third-fewest in the field on Sunday.

Spieth came up three shots short in his bid to become the youngest Masters winner, though he is the youngest in Masters history to finish runner-up or tied for second. Spieth played the last 11 holes on Sunday at 3-over.

Blixt became the first golfer to play under par in each of his first four career rounds at the Masters since Fuzzy Zoeller did so in his 1979 victory. Blixt joined Jesper Parnevik, Henrik Stenson and Niclas Fasth as Swedish golfers to finish as runners-up in majors.