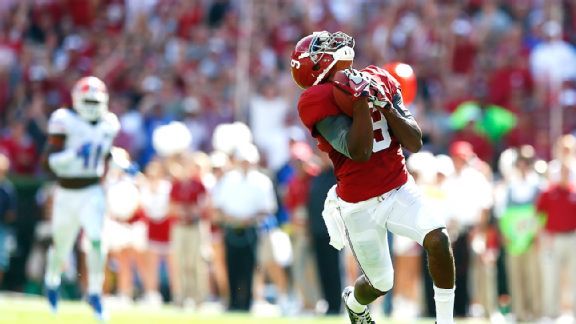 Amari Cooper will match up against a stingy Ole Miss pass defense.The SEC West has been dominant in the first month of the season. Consider these stats:

Given the quality of the division, it’s no surprise that six of the 10 toughest remaining schedules belong to teams in the SEC West.

This week will be the first real conference test for many of the SEC West’s top teams. Three of the weekend's best games (and perhaps the three best, period) -- Alabama at Ole Miss, Texas A&M at Mississippi State and LSU at Auburn -- all involve SEC West teams. Below is one matchup to watch in each of these games.

Cooper has accounted for 49 percent of Alabama’s receiving yards and has 41 more targets than any other Alabama receiver. He has more yards after the catch (320) and more receptions of 20 yards or longer (10) than Ole Miss has allowed this year.

The Rebels must limit Cooper downfield, after the catch and on third down. QB Blake Sims is 9-of-10 with seven first downs when targeting Cooper on third down, which is a big reason Sims leads the nation in third-down QBR.

Ole Miss leads the SEC in most major passing categories on defense and has eight more interceptions than passing touchdowns allowed, the highest margin in the country. To continue this success, the Rebels must contain Cooper, who statistically has been the best wide receiver in the nation this season.

Determining which receiver to try to shut down may be a challenge. The Aggies have seven receivers with at least 100 receiving yards this season (tied for second-most in the FBS) and have an FBS-high nine players with a receiving touchdown.

Since Gus Malzahn took over as coach, Auburn has run on 69 percent of its plays and ranks third in the FBS in rushing yards per game, behind two triple-option offenses. Auburn is 13-0 in the last two seasons when it runs for at least 250 yards and 3-2 when it does not.

One of those losses came at LSU last season, when Auburn was limited to 213 rushing yards and 4.1 yards per rush. LSU forced Auburn to pass on 40 percent of its plays, Auburn’s second-highest percentage in a game last season.

Without DT Ego Ferguson and Anthony Johnson, however, LSU has not had the same rushing defense as the one the slowed Auburn in 2013. LSU is allowing the third-most rushing yards per game in the SEC and has allowed two opponents to rush for at least 250 yards. LSU did not allow any team to reach that mark in 2013.

LSU has allowed the sixth-most rushing yards in the nation to opposing quarterbacks, which is not a good sign considering Auburn's Nick Marshall ranks third among active quarterbacks with 1,341 rushing yards since the start of last season. Nonetheless, if LSU can follow the blueprint that it set in 2013 -- and that Kansas State followed in 2014 -- by limiting Auburn’s run game and forcing Marshall to pass, it might hand Auburn its first loss of the season for a second straight year.