LOUISVILLE, Ky. -- The truth-in-advertising award in sports goes to the Kentucky Derby. The race bills itself "the most exciting two minutes in sports" and then backs it up every May.

Seriously. Pick any other routinely occurring two minutes of competition and compare it to this horse race on the first Saturday in May.

The Kentucky Derby is the ultimate two-minute drill. It's Joe Montana against the Bengals with the clock running out -- every year. With everything riding on it.

It is now or never for every horse in the race -- a single dash at immortality, a mile-and-a-quarter cavalry charge toward history. Unlike John Elway in the Super Bowl or Roy Williams in the Final Four or Phil Mickelson in a major, there are no second chances at the Derby. Thoroughbreds are only 3-year-olds once.

Win and your name is memorialized on the paddock walls of Churchill Downs for as long as the place stands. Lose and you're assigned to the small type of the race charts, on your way to eternal anonymity.

But it's not just the suddenness or the stakes. It is the steady build to a razor's-edge climax -- three years of dreaming, four months of 3-year-old racing, several weeks of final preparation, then many tense hours of anticipation on race day.

And after an explosive 120-plus seconds, it's all over.

There were 34,642 thoroughbred foals born in 2004 in the United States. First they had to survive, then they had to learn how to run.

Upon turning 3 in January, a total of 450 were nominated to run in the Triple Crown races.

Now, after winning enough money in graded stakes races and staying healthy in a sport rife with injury, 20 are entered to go to the post Saturday at 6:04 p.m. ET. That's 4.4 percent of all those nominated, and .05 percent of all those foaled three years before. Even among the elite animals carefully and expensively bred with an eye toward winning the roses, it's an astronomical long shot. In Kentucky alone, there were 9,815 foals born in 2004.

And, of course, only one will win, becoming the most famous horse of his generation.

And then you coax them up to race day, through a spring of steadily escalating anticipation. Some of these animals have not run since March, so their connections have had nothing to do but daydream about this race for up to eight weeks.

Even the connections of the most recently raced Derby horses have had at least three weeks to think about it. It's not like other sports, in which you play again in a few days or a week -- or, at the Super Bowl most of the time, two weeks.

Race day itself teems with nervous energy. The morning routine starts for the trainers and animals before dawn, but the big race isn't until after 6 p.m. There are hours and hours to kill, amid 150,000 partying people.

When they finally call the horses to the post for the Kentucky Derby on the backside, you can feel the pulses jump and adrenaline surge. Then walking with the horse over to the paddock for saddling in front of the full grandstand and under the Twin Spires is a huge rush. Yet even then, there's an hour before they run the race.

When they finally put the jocks on the horses and parade them past the grandstand and play "My Old Kentucky Home," it's serious sweaty palms time. Then they load 'em in the starting gate and, for a palpitating couple of seconds before the gates burst open, it's all right there in the balance.

Everything thereafter is critical.

One wrong move and you're cooked. That's the other huge difference between this and other sporting events, along with the once-in-a-lifetime nature for the animals: there is zero margin for error. In football, you can fumble, punt, throw interceptions and make a comeback. In basketball you can get down 15 and come back.

In a two-minute event, it either all goes perfectly or you lose. You stumble at the start, it's over. You get squeezed back or fanned wide in the traffic jam on the first turn, you're done. You push the pace too fast, you're gassed too soon. The importance of racing luck cannot be overstated.

And with the largest field of the year in American racing and all the money and prestige on the line, the in-race pressure on the jockeys, many of them scantly educated and inexperienced, is immense. With adrenaline coursing through their veins, they must balance the running style of their own horse with the pace scenario unfolding around them, forming on-the-fly judgments that can make or break their careers. It takes a special jockey to perform at his best in this cauldron of tension.

More than that, it takes a special horse. The jock must put him in position, and then the animal's talent, fortitude and gene pool must carry the day in the final furlongs.

Most times, we don't fully grasp what's transpiring until it's right in front of us down the stretch, and 150,000 people are roaring and somebody is winning the thing.

When the leaders come off the turn and into full view of the grandstand, raw emotions will surge. It will take roughly 24 seconds for the winning colt to cover the final quarter-mile sprint into history, and it will be a life-altering (and mood-altering) moment for the winning connections. 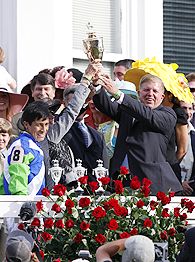 Old people will behave like giddy children. Models of decorum will lose it. Pillars of society will scream themselves hoarse. Men worth hundreds of millions of dollars will exult over a winning purse not worth nearly as much as the richest races in the world.

Because there is no price tag on winning the Kentucky Derby.

And then the emotional trap door swings open beneath your feet -- it's over almost as soon as it began. No other sport boils down its highlight moment to something so brief and irrevocable.

When it's done, you can almost feel the emotional sag in the majestic old edifice. It's such a long lead-up to such a short event that it really fits the definition of breathtaking.

But don't just take my word for it. This is part of what John Steinbeck wrote after seeing the Derby for the first time, in 1956, a race won by Needles:

By the time this is written, there will be few people in the nation who will not have seen the race on television or heard it on radio, and they will all have felt to some extent the bursting emotion at Churchill Downs. Every step of the great Needles will have been discussed--how he dawdled along trailing the field for two-thirds of the course, then fired himself like a torpedo past the screaming stands and the straining horses to win while the balloon of tension swelled and burst and it was all over.

Now there is a languor. Over a hundred thousand hearts are more spent than Needles' heart, and some of them split and their owners on the way to the hospital or the morgue.

I am fulfilled and weary. This Kentucky Derby, whatever it is--a race, an emotion, a turbulence, an explosion--is one of the most beautiful and violent and satisfying things I have ever experienced. And I suspect that, as with other wonders, the people one by one have taken from it exactly as much good or evil as they brought to it.

What an experience. I am glad I have seen and felt it at last.