A short while after shocking Oklahoma, and by extension, the world, Colorado coach Dan Hawkins was squiring recruits across campus on a golf-cart tour.

It turned into a victory tour, as the caravan was mobbed by celebrating students.

"Everyone's fired up," Hawkins said with a chuckle Saturday night. 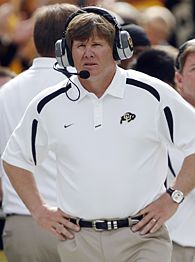 Underdog campuses were fired up all over America on Insanity Saturday. They were also fired up in Auburn, Ala. And in Manhattan, Kan. And College Park, Md. And Tampa, Fla., too.

The students in those locales had reason to party after their teams upset top-10 teams this weekend. Down went No. 3 Oklahoma to Colorado, No. 4 Florida to Auburn, No. 7 Texas to Kansas State, No. 10 Rutgers to Maryland, and on Friday, No. 5 West Virginia to South Florida.

Throw in upset losses by No. 13 Clemson and No. 21 Penn State and even first-half deficits for big dogs USC and LSU against Washington and Tulane, respectively, and you have Insanity Saturday.

Just that fast, the college football landscape shifted seismically beneath our feet.

Just that fast, the Red River Shootout game Saturday between Oklahoma and Texas was dropped to undercard status. For the first time in years, it's not the marquee game in the Big 12. And for the first time in years, the league's maligned North looks more compelling than the South. If you can believe it, the biggest game in that league next week might be unbeaten Kansas at 3-1 Kansas State -- either that or 4-1 Nebraska at unbeaten Missouri.

Just that fast, the upcoming LSU-Florida showdown Saturday in Baton Rouge lost half its helium when the Gators were shocked in The Swamp by an Auburn team that had lost at home to South Florida and Mississippi State on consecutive weekends.

Just that fast, the three Big East teams that began the season in the Top 25 all have at least one loss. Louisville went down first, then West Virginia, now Rutgers. Suddenly South Florida, Connecticut and Cincinnati are the unbeaten teams in the Big East. Honk if you foresaw that in August.

Just that fast, Illinois is 4-1 and tied for first in the Big Ten at 2-0. That's the same Illinois that went 2-10 last year, with only one victory over I-A competition.

Just that fast, we have an ACC plot twist that leaves Virginia and Boston College well out in front in their respective divisions at 3-0 in league play. Virginia was left for dead after a Week 1 blowout loss to Wyoming. Boston College was picked last in its division by at least one preseason magazine.

And just that fast, USC and LSU put that much more distance between themselves and what's left of the pack.

The object lesson here is that no favorite is safe. Not at home, not on the road, not in league play, not out of league play. If those lessons hadn't already been learned by Appalachian State 34, Michigan 32, and Syracuse 38, Louisville 35, they were reinforced on Insanity Saturday. 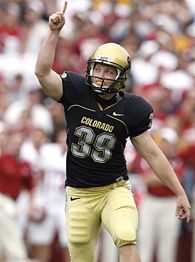 And no lead is safe. You'd think the Sooners getting up 24-7 would be enough to make Colorado quit. You'd be wrong. The Buffaloes scored the final 20 points, winning on the last play of the game -- a 45-yard field goal by Kevin Eberhart.

"Just the belief factor," Hawkins said. "They've seen enough, done enough and been through enough that they were not going to worry about the decal on the side of the helmet."

He was talking about his own team, but it can be extrapolated nationwide. Underdogs aren't scared right now, by much of anyone. Players and coaches are shrugging off past history, blowing off bad losses, not worrying about falling behind and regrouping to pull upsets nobody saw coming. Nobody's rolling over. (Well, maybe North Texas is rolling over, but that's about it).

After working a miracle at Boise State, Hawkins came to Colorado last season and suffered through a 2-10 debacle. His first game was a nine-point loss to I-AA Montana State. But the Buffaloes showed improvement during the season and glimpses of what was to come, most compellingly an agonizing one-point loss at Georgia.

"We've played good games before, but this is the first time we have really kicked the door down," junior defensive tackle George Hypolite said.

Said Hawkins: "Last year when we went to Georgia, I'm not sure we believed we could win. Quite frankly, our guys were surprised we were there within reach at the end.

"This year against Florida State [a 16-6 loss], those guys were genuinely disappointed we didn't win the game. Because we could've won, and Florida State has players as good as anybody in the country. So we thought we could play with anybody.

"So I felt like this was a perfect storm. They're coming to our house, it's a morning game, we're getting better and they hadn't played anybody like us."

By that, Hawkins meant a physical team willing to slug the ball between the tackles all game -- running it 46 times on the day. In the fourth quarter Colorado pushed through a worn-down Oklahoma defense for 17 points. 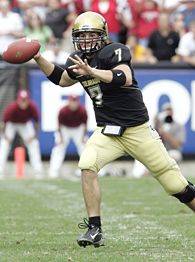 And when the Buffs needed to throw it, the coach's son did a fine job of that. Redshirt freshman Cody Hawkins has had a lot on his shoulders this season, but he handled it well against the Sooners, completing 22 of 36 passes for 220 yards, two touchdowns and two interceptions.

"He's done a nice job, he really has," Hawkins said. "I've kind of low-keyed it, but he's doing well. He can handle a lot, he's got very good poise, he's a good leader and he can make some plays running around a little bit."

Cody Hawkins and many of his young teammates are growing up before the head coach's eyes. Big things were expected when Dan Hawkins replaced Gary Barnett, and this might have been the start of them.

"I've had breakthrough moments everywhere I've been," Dan Hawkins said. "That's where everybody drinks the Kool-Aid and goes, 'OK, I'm in.' If they're all in, you can make hay. You can talk and talk and talk, but until they see it, until they see you score one more point than the other guys, it can be hard to believe."

On Insanity Saturday, there were plenty of hard-to-believe moments. But the underdogs believed every time.