SAN DIEGO -- Less than an hour after Phil Mickelson acknowledged he was wrong to criticize Tiger Woods' equipment, his cell phone rang. 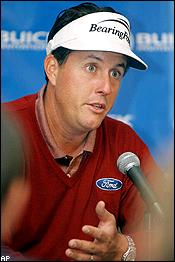 Just like that, golf's latest feud appeared to be over.

''I did call him back,'' Woods said Wednesday. ''We talked and
cleared the air. Everything is fine. No worries. As we all know,
Phil can try to be a smart aleck at times. I think that was one of
those instances where it just backfired on him.''

The only worry Woods has now is the condition of his left knee --
and his game.

He'll know more about both when the Buick Invitational begins at
soggy Torrey Pines, marking the return of the world's No. 1 player
following knee surgery Dec. 12.

"I'm excited, excited to be back," said Woods, who received his
fourth straight Player of the Year Award on Wednesday. "I'm
excited to get back out there and play again and compete."

A steady rain that fell across the cliffside course north of San
Diego washed out the pro-am and kept Woods from getting in one
final practice round before ending the longest layoff of his
career.

Thursday's opening round might even be delayed, as more rain is
in the forecast.

Woods said while his knee is not 100 percent, it's much better
than last year and is strong enough for him to play.

''I'm expecting to go out there and give it my best and see what
happens,'' he said. ''Hopefully, it feels as good as it does now at
the end of Sunday.''

The same could be said of his relationship with Mickelson --
probably not 100 percent but better than it was last week, and good
enough for them to hash it out.

Mickelson caused a stir last week when he said in an interview
with Golf Magazine that Woods has ''inferior'' clubs. He then tried
to pay Woods a compliment by saying he was the only player good
enough to ''overcome the equipment he's stuck with.''

Woods had been using Titleist equipment until changing to the
Nike Golf ball in 2000, the driver last year at Pebble Beach and
the irons in September. He had great success each time he switched.

Mickelson endorses Titleist, and once touted its Pro V1 ball as
having a greater impact on golf than when steel replaced hickory in
club shafts.

It is rare for players to denigrate other manufacturers. Rarer
still is when it comes from a player who has played second-fiddle --
or lower -- to Woods the last six years.

Mickelson made no excuses Wednesday, nor did he dodge any
criticism.

''It was an area that I just never should have gone,'' he said.
''I did not mean anything malicious by it, or I wasn't trying to
make a derogatory statement toward anybody. I still should not have
gone in that area.''

Mickelson said he apologized to Nike, and left Woods a few
messages on his cell phone. Within an hour, Woods finally called
him back.

''He apologized. He was sorry for what he had done,'' Woods
said. ''It wasn't a personal shot at me. I thought it was Phil
trying to be funny, and it didn't come off right at all.''

Woods might not forget the comments that easily. During his
practice round Tuesday, he ripped one drive down the middle and
said with a smile, ''Not bad for inferior equipment.''

But now, on to more important things. ''We're here to compete
and not worry about things like that,'' Woods said.

Woods hasn't competed against anyone but his father since he
finished second in his Target World Challenge on Dec. 8. Tired of
being in pain for the better part of two years, he had arthroscopic
surgery four days later.

Woods played twice in Florida last week, but Tuesday was the
first time he'd played 18 holes while walking. He expects no
trouble when the tournament begins.

He has some catching up to do, but that's not unusual.

Woods hasn't won his first tournament since Bay Hill each of the
last two years, although he's never been this far behind on the
money list. Ernie Els won the first two PGA Tour events and has
$1.8 million more than Woods.

Until this year, the most Woods has ever trailed on the money
list was in 1996, when he tied for 60th in his professional debut
at the Greater Milwaukee Open, earned a paltry $2,544 and was
nearly $1.6 million behind Mickelson.

Woods said he could have played the season-opening Mercedes
Championships at Kapalua, but it wasn't worth the risk.

''Would I have injured my knee and have surgery at the end of
this year? Probably,'' he said. ''The longer I took off, the better
it would be for the recuperation. We took the most conservative
route. I think that's one of the reasons why I feel as good as I do
now.''

The Buick Invitational is a good place to start.

Woods grew up competing at Torrey Pines as a junior and has
never finished worse than fifth at the Buick Invitational as a pro.
Last year, he had to make a 5-foot putt on the final hole Friday
just to make the cut, but he still had a chance to win on Sunday.