NORTH PLAINS, Ore. -- It didn't take long for the feel-good
tale of the teens in the U.S. Women's Open to become tarnished.

Michelle Wie, the 13-year-old long-driving sensation, and her
caddie father, B.J. Wie, claim Danielle Ammaccapane bumped Wie
during the first round and berated her over a breach of etiquette.

Wie was still shaken by the words Friday. When asked what
Ammaccapane told her, she replied: "Ask my dad. I don't want to
talk about it."

B.J. Wie said trouble began on the 14th hole in the first round
Thursday as Wie played with Ammaccapane and Tracy Hanson.

The young golfer said Ammaccapane, a 16-year veteran on the LPGA
Tour, was upset that Wie had walked in her line as she prepared to
putt. Wie said she was trying to go behind Ammaccapane to get to
her own putt.

The father claimed Ammaccapane bumped, pushed or brushed his
daughter on the green.

In the scoring tent after the first round, Michelle Wie said
Ammaccapane, 37, had words with her, although the teen wouldn't
disclose what was said.

"I was really surprised, because I guess I've always played
with really nice people," Wie said. 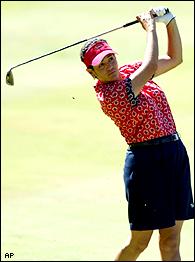 B.J. Wie would only say the exchange was "nasty," although he
wasn't in the scoring tent at the time.

"She's young," B.J. Wie said of his daughter. "How can she
treat a little girl like that?"

Ammaccapane, who has seven LPGA Tour victories, wouldn't talk
about the matter after her round Friday.

"I don't have any comments about playing, or etiquette or
anything else," she said as she left the course. She and Wie did
not speak or shake hands after the round.

"I'm not going to answer anything about Michelle," she said.

It was the second time in three years that a teenager has been
in the middle of an etiquette controversy in the U.S. Women's Open.

Morgan Pressel, 13 when she played at Pine Needles in 2001,
frequently walked in the putting line of her playing partners. One
of them, Heather Daly-Donofrio, tried to speak privately to Pressel
about the breach, but the teen wouldn't listen.

"Whatever," Pressel said at the time.

Daly-Donofrio also declined to comment two years ago, sensing
she had nothing to gain by publicly criticizing a kid.

It also brought back memories of the 1998 U.S. Open, when Peter
Kuchar angered Justin Leonard for his movement on the green and
cheerleading while caddying for his son, U.S. Amateur champion Matt
Kuchar.

Wie, a 6-footer from Honolulu who has been hailed as the future
of women's golf, has grabbed attention with her 300-yard drives.

Two weeks ago, Wie became the youngest player to win a USGA
title for adults at the U.S. Women's Amateur Public Links. Earlier
this year, she played in the final group of the Nabisco
Championship.

She was one of 14 teenagers playing at Pumpkin Ridge.

USGA spokesman Marty Parkes walked with the group Thursday and
noticed tension rising. He said on the eight hole, Wie hit out of
turn and Ammaccapane followed with a poor shot from the bunker.

He also said that the Wies had a tendency to walk up too quickly
to the ball, and Hanson at times told them to stop and back up.

"Down the stretch it was a little frosty," Parkes said.

B.J. Wie said he complained to the USGA on Thursday night,
asking that Ammaccapane not speak directly to Michelle and instead
go through rules officials.

Krendra Graham, senior director of rules and competition for the
U.S. Women's Open, would not discuss details about the alleged
conflict or B.J. Wie's request.

"From what I understand there was some discussion and some
effort was made today," said Graham, who met with Ammaccapane in
the scoring area to discuss the matter after her round Friday.

"I think it's between Danielle and Michelle," Graham said,
refusing to say whether any further action would be taken
concerning the matter.

"He's entitled to what he has to say," Ammaccapane said of
B.J. Wie. "If he wants to bad mouth me, he can bad mouth me."

B.J. Wie suggested Ammaccapane and Hanson should have cut he and
his daughter some slack.

"They play golf for a living, they know the etiquette," he
said. "We don't know, we are still learning."