The following managerial "tree" connects all 30 current major league managers back to either John McGraw, Connie Mack or Miller Huggins, Hall of Famers who played for Ned Hanlon, "The Father of Modern Baseball." The managers had to either play for or coach under the next branch. Below the graphic is a key that show how today's skippers connect to the Big Three. Some, like Joe Girardi and Brad Ausmus, can easily be connected to more than one, but for the sake of simplicity, we used one branch per manager. 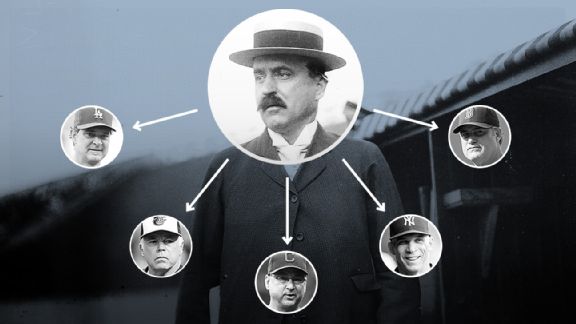 The MLB manager tree: All 30 current managers can be linked to either John McGraw, Connie Mack or Miller Huggins -- Hall of Famers who played for Ned Hanlon. Wulf »

The father of modern baseball: Ned Hanlon was to managing what Socrates was to philosophy, what Eclipse was to thoroughbred racing, what Claude Monet was to Impressionism. Wulf »

Who is baseball's best manager? We surveyed 50 scouts, front-office executives, coaches and media analysts and asked them to select MLB's top skipper. Crasnick »

Bruce Bochy's influences: Bochy and his teams are not afraid of the big moments. Wulf »

Why managing is harder than ever: If the summer of 2014 was a high point for the profession, the first third of the 2015 season has been a pile of indignity and unemployment.Crasnick »

MLB's 'most likely' and 'least likely' managers: Managers make strategic decisions every game. Here's which ones favor shifting, refrain from bunting, and more.Spratt

Video: Analyst Eric Wedge looks at how stability in the front office has helped make Bruce Bochy the best manager in the major leagues. Watch

20. Craig Counsell (Milwaukee Brewers) played for Leyland (Florida Marlins, 1997-98), who coached under La Russa, who was mentored by Richards, who played for Mack.