Ernie Harwell has broadcast more than 8,000 baseball games, so it figures that he has seen just about everything baseball has to offer. On his first night at the microphone calling a major-league game, he got a taste of what was in store.

"August 4, 1948,'' said the 85-year-old Harwell, for whom storytelling is a specialty and an art. "I was supposed to do the game on August 3, but it got rained out. I had to spend 24 hours waiting for my debut. It was a night game -- the Dodgers against the Cubs. Russ Meyer was pitching for the Cubs and in the first inning, Jackie Robinson stole home.'' 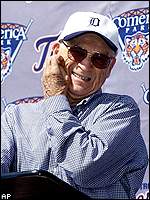 Almost exactly 55 years to the date of his big-league debut, Harwell will grace the microphone on ESPN as a guest "Living Legend" on the 7 p.m. ET telecast of the Rangers-Yankees game. Harwell retired from the broadcast booth last season.

At 15, Harwell, who battled through a speech impediment in his childhood, became a correspondent for The Sporting News (under the name "W. Earnest Harwell") covering the Atlanta Crackers. After graduating from Emory, Harwell landed a job with WSB Radio, then became the voice of the Crackers after returning from a four-year stint in the Marines. A chance to fill in for an ailing Red Barber came next in the middle of the 1948 season. In order to get Harwell, the Dodgers sent compensation to the Crackers in the form of a player, catcher Cliff Dapper.

Harwell was with the Dodgers through the end of the 1949 season, then took a job to work with Russ Hodges on the New York Giants' radio and television broadcasts. In 1951, the Giants came from 13½ games back to force a three-game playoff series with the Dodgers. Harwell got what he thought was the best assignment, working television for the decisive game. When Bobby Thomson hit "The Shot Heard Round the World," Harwell simply said two words "It's gone!" Hodges screamed over and over "The Giants win the pennant!" which was preserved on tape by a smart fan and became the most famous home run call in baseball history.

"Only Mrs. Harwell and I know what I said,'' Harwell said with a laugh, referring to his wife Lulu, who isn't a baseball fan, but has been married to Ernie since 1941. The Harwells have two sons and twin daughters.

Harwell left the Giants to become the lead broadcaster for the Baltimore Orioles in 1954 (their first season after moving from St. Louis), then moved on to the Detroit Tigers for the 1960 season. Other than in 1992, when he was let go for a year by then-president Bo Schembechler, Harwell missed a total of two broadcasts in 41 seasons with the Tigers.

The two best seasons for Harwell were 1968 and 1984, those in which the Tigers won the World Series. The 1968 squad featured 31-game winner Denny McLain, and rallied from a 3-games-to-1 deficit to defeat the Cardinals for the championship. That team may have helped launch Harwell's immense popularity. A newspaper employee strike that lasted from November 1967 until the following August meant that the only way fans could follow the Tigers was through electronic media. Not many games were televised that season, so radio broadcasts were the source of information.

Harwell has done his share of famous games. Besides Thomson's historic home run, Harwell broadcast the Yankees-Red Sox playoff game in 1978 and the classic Game 5 of the 1986 American League Championship Series between the Red Sox and Angels. He was there for the call when Sandy Koufax set the World Series record for strikeouts in a game in 1963, then again when Bob Gibson broke that mark in 1968.

Harwell is most noted for keeping his listeners informed (it is said that no one gives the score more often than he did) and entertained with fascinating stories about the game, its history, and its personalities. He also had a unique way of expressing himself. The most famous of many Harwell-isms is: "He stood there like a house by the side of the road" (to indicate a hitter taking a called third strike). It didn't matter whether the Tigers were dominating or getting drubbed, for Harwell always took the same outlook to the ballpark.

"The thing about baseball is that each game is its own entity,'' said Harwell "Two bad teams can play a great game."

Harwell has done plenty of other things in his working career, most notably sportswriting (he has written four baseball books) and songwriting. The styles range from country to soul and the subjects vary, with baseball having been a topic on a couple of occasions. "Move over Babe, Here Comes Henry," was written to commemorate Hank Aaron's 715th home run and is on one of the "Baseball's Greatest Hits" CD compilations that were recently released. He also penned "The Ballad of Denny McLain" when the Tigers pitcher won 31 games in 1968 and "Michigan and Trumbull" to mark the closing of Tiger Stadium.

Non-baseball titles include "I Don't Know Any Better" with B.J. Thomas, "One Room World" with Mitch Ryder and "Nobody's Perfect" with Sammy Fain (who was best known for the hit "Love is a Many Splendored Thing.") One of Harwell's most memorable musical endeavors was to work with Johnny Mercer, whom he termed "one of the top three songwriters of all time,'' on "Sing, Sing, Sing Every Song."

Trying to find some of Harwell's work isn't easy. Most are obscure enough only to be found on E-Bay or in the racks of the local thrift shop.

"Songs don't last long,'' said Harwell, who has written approximately 65 sets of lyrics. "Even a good song has a very short life. Most of them have been lost to posterity."

He admitted the bug is tempting enough that he may pen a few more romantic verses when he has some free time.

But this isn't exactly a full-fledged retirement for Harwell. Since the end of the 2002 season, he has toured the country as a banquet speaker, done a series of television vignettes for the cable program "Tigers Weekly," continued to write a weekly column for the Detroit Free-Press, and serves as a spokesman for Blue Cross/Blue Shield. He keeps in shape by jumping rope and walking a couple of miles every day.

He even filled in on one Tigers telecast, as Detroit rallied to thwart Roger Clemens' attempt to earn his 300th win. He'll pop in at least one more time this year on ESPN's telecast. The term "Living Legend" is extremely appropriate.

"It's complimentary to be included,'' Harwell said. "But I always looked at myself as a worker. I saw a lot of baseball and I enjoyed it. I didn't ask for more than that. Announcing is the most rewarding job I could have ever had."

Mark Simon is a researcher for ESPN's Major League Baseball telecasts. He can be contacted at Mark.A.Simon@espn.com.