DAYTONA BEACH, Fla. -- David Gilliland was at a small race shop outside of Charlotte, N.C., his fingers dirty with oil and grease as he worked under the hood of a Busch Series car. 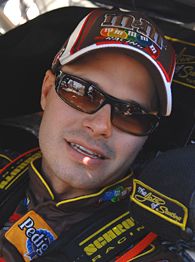 In the background he could hear the television broadcast of the Daytona 500. Occasionally, he'd sneak a peak to find out who was winning, and then go back to work for an upstart, unsponsored team that was so far behind that it couldn't get a car ready for Daytona.

That was a year ago.

Since then Gilliland's life has turned into one of those rags-to-riches stories made for Hollywood.

He won the Busch Series race at Kentucky last July 17 to end a string of 18 consecutive victories for Nextel Cup drivers in NASCAR's second-tier series. The next day he got offers from 10 teams offering full- and part-time Cup rides.

A few weeks later, he signed a full-time Cup deal to replace Elliott Sadler in the No. 38 Ford at Robert Yates Racing.

Now he's on the pole for Sunday's Daytona 500 with stars such as Dale Earnhardt Jr. saying he has a chance to win.

"To be here one year later is crazy," Gilliland said as he sat outside the Ford motorcoach at Daytona International Speedway. "I keep saying it's a dream come true and I hope I don't wake up from it."

Few know much about this 30-year-old rookie who officially isn't a rookie because he drove in 14 races last season. He played on the same golf team as Tiger Woods through his sophomore year at Western High School in Anaheim, Calif.

He didn't get involved in racing until his junior year, when he began cleaning cars for his dad, Butch, a driver in the Winston West Series.

Gilliland eventually worked his way up to crew chief, helping his father win the series championship in 1997 while, at 21, becoming the youngest to win the series' crew chief of the year award.

He raced part-time in the West series from 1997 to 2002 and competed in the Late Model division at Southern California dirt tracks.

After a few full-time seasons in the West series, Gilliland accepted an offer to drive in the Busch Series for Clay Andrews' unsponsored team.

Andrews moved Gilliland to the Charlotte area, where a majority of the race teams are based. He paired him with former Cup driver Jerry Nadeau, who was hired as a team consultant.

The opportunity came at Kentucky.

At the time, Cup owners were complaining about the lack of talent in the lower series. They were wondering who would fill all the openings with seven full-time Toyota teams entering in 2007 and several other teams such as RYR looking to replace drivers.

"After the race, [Nadeau] pulled me aside and said, 'Your life has changed forever,' " Gilliland recalled.

Gilliland realized that the next day when his cell phone began ringing while he drove his motorhome from Kentucky to Charlotte. On the first ring he woke up his wife, Michelle, and said, "This might be it -- finally!"

Doug Yates, the son of RYR founder Doug Yates, was the first to call. His team was reeling from the impending defections of 1999 Cup champion Dale Jarrett to Toyota's Michael Waltrip Racing and Sadler to Evernham Motorsports.

He was looking for someone to help save a company that many left for dead.

"Doug called me and said, 'We just found our new driver,' " Robert Yates said. "I said, 'What do you mean?' He said, 'The guy that just won the race, that's our new driver. We're going to sign him.'

"He said some guys had been telling him about him and he said, 'That's the cat. He doesn't choke. He gets it done.' "

Many close to Gilliland said he'd be crazy not to take it, reminding of the uphill climb facing RYR.

So Gilliland turned to his wife for advice. She asked what his heart told him. She went down the line of each offer, asking how he felt after each owner called.

When she got to Yates, Gilliland said, "I fell out of my chair." 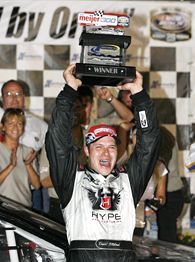 "I felt like if we went to Richard Childress Racing, who was at the top of their game, if I went in and won a race, what would it really mean?" Gilliland said. "They were winning races already. If we get this deal turned around at Robert Yates Racing, it means a lot more.

"The best thing about all of this is the smile on Robert's face [now], to see him happy again. Everybody at that organization is just fired up."

It wasn't that way when Gilliland signed. He recalled employees walking around the shops with their heads down, many saying they didn't want to be there after Jarrett and Sadler were gone.

"Everybody was still working hard and everything, but it just wasn't right," he said.

The turnaround came shortly after the final race of 2006. Personnel changes were made and Yates, who was so depressed at times that he thought he was dying, became more involved again.

He showed those that didn't want to be a part of the organization the door and found people who were committed to turning things around.

"The difference between then and now is everybody wants to be there," Gilliland said. "You can tell that when you walk in the door. Everybody is very enthusiastic and looking forward to next week.

Winning the top two spots -- Ricky Rudd is on the outside of Row 1 -- for the 500 doesn't mean the program has made a complete turnaround. Gilliland sat on the pole at Talladega Superspeedway in October and finished 15th.

But winning the pole, along with Gilliland's second-place finish in the Budweiser Shootout and a good test at Las Vegas Speedway, does give the organization hope.

Gilliland definitely has hope for the 500. Earnhardt Jr., Tony Stewart and Jimmie Johnson all told him after the Shootout they looked forward to working with him in the draft, the ultimate compliment for a driver making his Daytona debut.

"Earnhardt Jr., we worked together [Thursday]," Gilliland said. "He came up to me after the race and said, 'If you keep doing what you're doing, you'll have a shot at winning the Daytona 500.' It's those things that really mean a lot to me.

"You come into the sport with zero respect, basically. One week at a time, you gain a little bit."

Yates calls Gilliland a "young bull" and compares him to Ernie Irvan, who won 15 races before retiring in 1999 after a series of serious accidents.

"He sure drives like him, so they must grow them pretty tough" in California, he said.

Gilliland, a throwback to a former era because he can build cars as well as drive them, said there are other drivers like him who simply need a break.

"In this whole sport, timing is so important," he said. "I tested a truck at the end of [2005]. I was so bummed I didn't get [the ride]. And it would have been a three-year deal and I would have been locked into that until I was 32.

"It's just funny how everything worked out. I'm a firm believer everything happens for a reason."