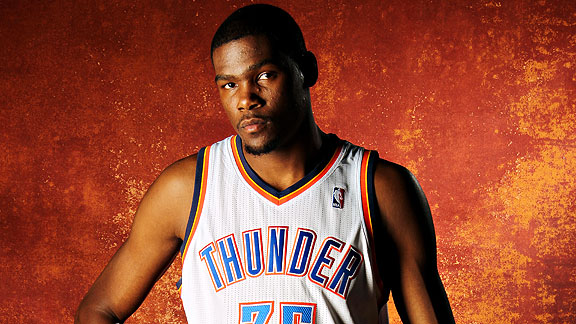 General managers predict Kevin Durant will be the 2010-2011 MVP.

Every preseason, the NBA.com GM Survey offers insight into the thinking of executives around the league.

This year the survey sends a strong message: GMs are not enamored with LeBron James and the Miami Heat.

They tell this story most starkly by almost completely ignoring the two-time reigning MVP James in predicting this season's MVP.

Last year, James won the MVP award by the second-biggest margin in MVP voting history. The season before that he won by almost as much. (Over the last two seasons, he has earned 225 out of a possible 246 first-place MVP votes.) At 25, James is at an age generally considered to be a player in his prime, he's expected to win more than ever thanks to his new teammates, and by objective measures of individual production he has been the only NBA player of his age to rival Michael Jordan.

However, in this season's GM survey, James received a single vote, out of 28 GMs surveyed, as the player most likely to win MVP. The Thunder's Kevin Durant -- fresh off a stellar performance for Team USA -- was the runaway favorite, winning 67 percent of the vote. Kobe Bryant -- who did not get a single first-place MVP vote last season -- was second with 26 percent. Like James, Dwight Howard received a single vote.

Other findings of the GM survey: