The 11th in a series of profiles of players that might be of interest to the Boston Celtics during the 2011 NBA Draft (June 23, Newark, N.J.):

Looking for someone who might still be on the board at No. 55 that the Celtics could target? SDSU's Malcolm Thomas has intriguing physical talen. From ESPN's player evaluation: 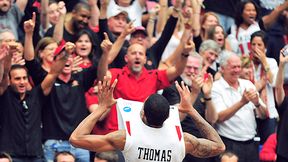 Malcolm Thomas exults in front of SDSU fans.Projection: Second round

Negative: Lacks a consistent jump shot... Undersized for his position

Ford's analysis: From May 5: "Thomas is an intriguing second-round prospect. He has terrific length and explosive leaping ability and showed off his defensive chops in the workout by blocking a number of shots. He's still pretty raw offensively and can display an inconsistent motor at times. But he's a very intriguing prospect in the second round."

In the news: From HoopsWorld: His 6-8 size makes him a tweener in the NBA, but his 7-2 wingspan allows him to play taller. Utilized as a power forward, sometimes center, at SDSU, Thomas sees himself playing the 3-4, depending on which team" in the NBA. "I feel like either way, I'm gonna be just the energy guy, the defensive guy, which I don't have a problem doing."

Payne's take: Similar to Fresno State's Greg Smith, Thomas would be an intriguing option for the Celtics at No. 55. He possesses most of the tools to be a solid role player in the NBA and every team, contender or not, can always use a self-proclaimed energy guy (something the C's found themselves lacking in the most recent postseason). With a willingness to crash the glass and defend the basket, Thomas would be a welcome addition to the Celtics' lineup, particularly if they part ways with unrestricted free-agent forward Glen Davis for good.