Cristiano Ronaldo brought the world's "beautiful game" to a sellout crowd in the Bronx on Wednesday.

And he didn't disappoint.

The game was part of the Herbalife World Football Challenge and was the second match played in the new Yankee Stadium. Chelsea and Paris Saint-Germain played to a 1-all tie at the stadium in late July. 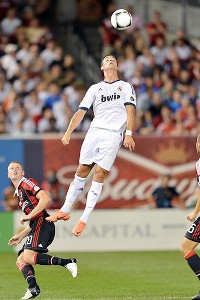 Cristiano Ronaldo soared above the competition Wednesday.The sellout crowd Wednesday gave the stadium a playoff-like atmosphere. And Ronaldo & Co. seemed to feed off it.

Said Real Madrid coach Jose Mourinho: "There was lots of magic here, and I think we gave the stadium what it deserved.

"If I have this kind of crowd, this enthusiastic crowd in the Bernabeu [Real Madrid's home stadium], I don’t lose a match in the Bernabeu," the coach added. "Because these people were fantastic."

The 2008 FIFA Player of the Year's first tally came in the 49th minute. He collected a pass from Lass Diarra and knocked it past AC Milan keeper Christian Abbiati to give Madrid a 2-1 lead.

His second goal came in the 66th minute, when he received a beautiful pass from Kaka and scored on an uncontested shot.

After the tally, Ronaldo stood near the right-field stands, head held high, soaking in the applause from an adoring crowd. It was the kind of applause normally reserved for a Derek Jeter late-inning hit or a CC Sabathia strikeout.

The stadium's field underwent an extensive overhaul for Wednesday's game. The Yankees' grounds crew started converting the diamond to a soccer pitch immediately after the Yanks' win over Toronto on Sunday.

And the pitch seemed to fit well inside the House That George Steinbrenner Built.

The end lines stretched from short right field to the left-center field wall on one side and from the right-field corner to about 20 feet in front of the Yankees' dugout on the other.

"A great field," is how one Real Madrid player described it.

And, on Wednesday, it belonged to Ronaldo, the main event in a game filled with stars.

Which is why Mourinho decided to keep his star player on the field for nearly 80 minutes.

"Historical stadium. Historical opponent. Full stadium. Great support," the coach said. "I think Cristiano is part of the show, part of what people want to see."

RONALDO WANTS KAKA TO STAY: Recent reports have stated that Real Madrid's Kaka is close to finding a new team.

The 30-year-old midfielder is largely a backup at Madrid and, according to reports, wants to return to Italy.

He did not address reporters after Wednesday's match.

But Ronaldo offered his opinion on Kaka's situation.

"I personally would like for Kaka to remain with the team. He is one of the top players in the world, and the top players need to be in Madrid," Ronaldo told Spanish-speaking reporters on Wednesday. "But that is Kaka's decision and we have to respect whether he chooses to stay or to go. ... But I believe he will stay."