Most of the time, I'm convinced that college football and basketball coaches are among the most overpaid workers on the planet.

Then I read about the Little League Parents Gone Wild at Arkansas. And about the octogenarian athletic director who moonlights as the backseat driver of the football program. And the book about the high school team, in which the star quarterback rips the coach of the Razorbacks. 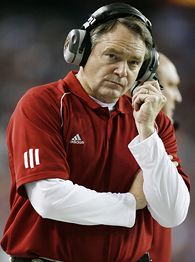 And I believe Houston Nutt is earning every cent of his reported $1.5 million salary. The hard way.

I also understand why Nutt's name has come up in connection with a couple of other jobs. You get the impression he's anxious to flee Fayetteville, despite having Heisman Trophy runnerup Darren McFadden and a whole lot of other talent from a 10-3 team returning in 2007.

Why? Perhaps because the psych ward that is Arkansas football is enough to drive a coach Nutts.

The news making headlines in Arkansas this week has nothing to do with preparing to face Wisconsin in the Capital One Bowl. It has to do with a parents' meeting with athletic director Frank Broyles to discuss "the direction of the program," the transfer of one true freshman and the apology of another. There are quotes aplenty from parents, including a "statement" issued by the mom of the hotshot quarterback.

I've seen more camaraderie on Jerry Springer's set -- and this is after winning the SEC West. Makes you wonder what the place is like when the Hogs aren't winning 10 games, doesn't it?

By empowering a high school coach, his star players and apparently their pushy parents, too, Nutt has given the inmates the keys to the asylum. To an extent, he's brought this on himself. Nutt combined the ingredients of a melodramatic cocktail that's now being stirred by the straw of teenage celebrity.

It seems a desperate coach made some promises he's unwilling to keep to a group of players and parents who have enjoyed too much hype and too much adulation much too soon.

In a fervent attempt to secure his job after an ugly 4-7 season in 2005, Nutt turned his program into the Springdale (Ark.) High School Continuing Education and Glorification Academy last winter. He hired the school's coach, Gus Malzahn, to be his offensive coordinator. That paved the way for the signing of four players from Springdale's undefeated state champs, most notably prep All-American quarterback Mitch Mustain.

Three of them -- Mustain, tight end Ben Cleveland and wide receiver Damian Williams -- played as true freshmen. Played a lot. Mustain started eight games and has thrown more passes than any other Arkansas quarterback this season. Williams started five games and was tied for second on the team with 19 catches. Cleveland started once and caught 11 passes, two of them for touchdowns. 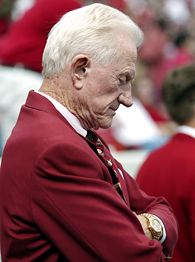 Parents of the three players met with Arkansas AD and icon-in-residence Frank Broyles last week. The fact that Broyles took the meeting was a chop-block to Nutt's authority. The Arkansas Democrat Gazette reported that Broyles told the parents Nutt was in charge of the football program -- but the 81-year-old former coach has never been a hands-off guy, and this meeting only reinforces the perception that he's constantly hovering over Nutt's shoulder.

The purpose of the meeting: The parents reportedly wanted to know whether Malzahn's no-huddle, spread offense would be the Hogs' offense of the future. It was not implemented this past season, which apparently runs counter to what the Springdale Mafia was promised during its recruitment to Fayetteville.

"From our perspective -- and it's only our perspective -- it seems as if you've been sold a bill of goods," Rick Cleveland, father of Ben Cleveland, told the Democrat Gazette. "We would never have committed here knowing that this was the offense, because we knew our boys wouldn't be happy."

Why, sure. How could you expect a kid to be happy with extensive playing time as a true freshman on a team that wins 10 games, advances to the SEC Championship Game and will play in one of the biggest non-BCS bowls? What do team accomplishments matter when Little Johnny isn't getting his touches?

"Our boys are used to catching 60 passes a year," Cleveland told the Democrat Gazette. "They want to go to a college where they get the same opportunity. Whether they're good enough to do that or not is a whole different question. They have to earn that."

Here's who's earned the right to be the centerpiece of the Arkansas offense: McFadden and fellow running back Felix Jones -- both of whom will be back in 2007. Anyone who watched those two rush for a combined 2,576 yards and thinks the Hogs' offense is going to change next year to Hawaii Southeast is deluded.

That reality might be why Williams is going to transfer, as was announced Wednesday night. Mustain and Cleveland say they're staying. 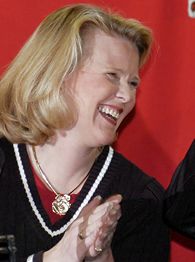 And just in case anyone gets the wrong idea, Mustain's mother, Beck Campbell, issued a "statement" to the media about the meeting with Broyles. It said, in part: "It was agreed by all parties involved that the head coach has the valid right to determine the direction of the program and the manner in which the team would develop."

No word on whether she hired a PR firm to help craft the statement.

Of course, that was after Mustain reportedly was confronted in a players-only meeting over comments he made while at Springdale about Nutt. In a new book on Springdale's championship season, Mustain said Nutt's offense was boring and that there might be a better chance he'd become a Razorback if Nutt were fired.

Mustain apologized to his teammates, and also in a one-on-one meeting with Nutt. The coach and player say everything is lovey-dovey now, even though Nutt benched Mustain while he was on an eight-game winning streak in favor of sophomore Casey Dick. (Fact: Dick's passing numbers are better than Mustain's for the year.)

Parents have a right to stand up for their children -- and Arkansas media members tell me the Springdale crew is populated with good people. But this melodrama seems symptomatic of an American athletic culture that has let celebrity seep down into the grass roots.

The world probably could get by without a book on Springdale High football. And without statements from the quarterback's mom. And without parental power plays at the major-college level.

Now, if Nutt lied to recruits just to get them to sign, he's a weasel. But it's a weasel's world when it comes to recruiting.

Coaches specialize in telling prospects what they want to hear, even if they have no intention of following through on it. Sometimes, though, the coaches know a little bit more than the parents.

I remember the first day freshmen reported at the University of Louisville one August several years ago. Then-Cardinals coach John L. Smith was asked about the tall, athletic kid working out with the quarterbacks at the morning session.

"Then why is he with the quarterbacks?" he was asked.

"Because his dad's here," Smith said. "He's leaving at lunch. This afternoon, the kid will be a safety."

The kid was Kerry Rhodes, who is having a stellar season for the New York Jets -- at safety.

We can only imagine the hysteria if Houston Nutt had dared suggest a position change for a member of the Springdale Mafia. Send lawyers, guns and money to Fayetteville in that event.