Sorenstam's hole-by-hole scores
FORT WORTH, Texas -- The first woman on the PGA Tour in 58
years played just like one of the boys.

In fact, Annika Sorenstam was better than some of them -- Sergio Garcia, Tom Lehman and two dozen others. 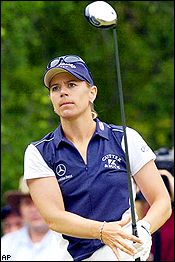 She split fairway after fairway. She had a birdie putt on every
hole. The only time she stepped into a bunker was to study the
break on the green.

"I played what I think was one of my best rounds ever,"
Sorenstam said after shooting a 1-over 71 amid the kind of frenzy
only Tiger Woods could appreciate.

That still might not be good enough to make the cut at the
Colonial, but a historic round in an atmosphere that matched the
occasion told her plenty.

Hey, she can play.

"It was more than I could have ever expected," Sorenstam said.

She was seven strokes behind Rory Sabbatini, who took advantage
of a soft course to shoot 64. He led by one over Mark Calcavecchia
and Patrick Sheehan.

Sorenstam was tied for 73rd -- the top 70 and ties get to play on
the weekend -- and will play Friday afternoon when the conditions
likely will be tougher.

Even if she doesn't make the cut, it might not matter.

For one round, Sorenstam showed why she was worth a sponsor's
exemption, and why she has become the most dominant woman golfer in
40 years.

With a gallery that stood a dozen deep and strained to see every
shot, Sorenstam missed only one fairway. She missed four greens,
but never far enough that she couldn't use her putter.

"She's a machine. She's awesome," said Aaron Barber, who
played with Sorenstam and had a 72. "I've never played with
someone over 18 holes who didn't miss a shot."

Dean Wilson, the other player in their group, had a 71.

Sorenstam hugged them both when she finished her round, another
indication this was no ordinary day.

Also at 71 was Nick Price, the defending champion who was among
those protesting her sponsor's exemption. Price has said it "reeks
of publicity." Sorenstam finished ahead of 26 players, including
Garcia (72) and Lehman (73).

But this wasn't an experiment to see if the LPGA's top player
was better than the men. She only wanted to see how her game
stacked up on a longer course (7,080 yards), with tucked pins,
against the best competition golf has to offer. 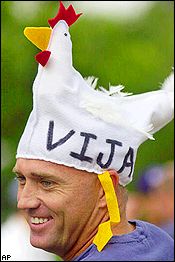 Several of those who played in the afternoon watched
hole-by-hole coverage of Sorenstam's round on television.

"She hit it a lot farther than I thought she would," Phil Mickelson said after his 67. "It looked like the way she's
playing, she could easily compete on this level."

Not many were worried that she would cost them their livelihood.

"It's not like she's robbing a bank," Calcavecchia said. "I
don't think any of the guys here feel threatened that she's trying
to take money out of our pockets."

The last woman to play on the PGA Tour was Babe Zaharias in
1945. The last time there was this much interest in one round was
when Woods made his professional debut in the 1996 Greater
Milwaukee Open.

Fans began gathering around the 10th tee nearly an hour before
Sorenstam started her round. They crammed into a clubhouse balcony,
on a grassy hill to the right of the tee, and covered every inch of
rope from tee to green.

Sorenstam was so nervous that she stopped practicing on the
putting green 20 minutes before her tee time.

She saw her mentor, former Swedish national coach Pia Nilsson,
standing behind the fence and gave her a long, hard hug.

"The pressure was building for months," Nilsson said. "I just
told her no matter what happens, she already was a winner."

Wilson and Barber each hit irons safely to the 10th fairway.

Sorenstam hit 4-wood, and as the ball descended from the
smoke-gray clouds and landed beyond the other two, the crowd
cheered as if it had been a game-winning field goal.

There were more women present than typically attend a PGA Tour
event, but the support was universal. Hundreds of fans wore "Go
Annika" buttons and held up signs urging her on. There was even
the odd cry of "You Da Woman!"

The loudest cheer of the day came at the par-3 13th, where
Sorenstam made her only birdie with a 15-foot putt from just off
the fringe. She pumped her first, kicked her leg and pointed to her
caddie.

Sorenstam thought a birdie would calm her nerves.

"I talked to Aaron and Dean a little bit and we were laughing,
but once I was over the ball, once I was looking at the flag, I was
nervous again," Sorenstam said.

She might have been helped by soft conditions brought on by two
days of rain because the greens held her approach shots -- eight of
them were 6-iron or longer.

Even so, Sorenstam was never over par until her final hole, when
she three-putted for bogey from just over the green.

She missed her goal -- even par -- by one stroke, but was still
five better than the odds out of Las Vegas. Her round didn't seem
all that remarkable perhaps because she made it look so easy.

Despite missing four birdies inside 15 feet, Sorenstam was
satisfied.

"This probably would be in the 60s on my tour," she said.

In some respects, it rivaled her record 59 in Phoenix two years
ago. Sorenstam was challenged to place no limits on what she can
do, and it paid off at Colonial.

"The circumstances, the competitors, the golf course ... this
is the next level," she said. "Obviously, shooting 59 prepared me
for something like this. I was nervous then, but nothing like the
way I felt during the round."

She eased into a chair before 300 reporters, looking both worn
out and pumped up.