I'll never forget the day the Red Sox signed Manny Ramirez. It was Dec. 13, 2000, and I was living a few blocks south of Fenway Park. Walking home from the Barnes & Noble in Kenmore Square, from Yawkey Way I could see the big display board above the center-field bleachers . . . 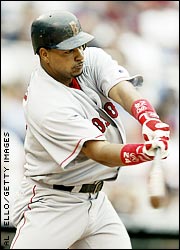 Dan Duquette was the general manager who signed Manny Ramirez. Now there's a new guy in Duquette's old office, and my guess is that the new guy recognizes Ramirez's great talent but has other ideas for the $100 million that Ramirez will collect (from somebody) over the next five years.

And let's be realistic, sports fans. There's only one man in the world who might spend $100 million on a player with an attitude, and his name is George Steinbrenner.

Would Yankees GM Brian Cashman ask his owner, Steinbrenner, for $100 million to sign a player like Manny Ramirez? Not on your life. Cashman would look at his roster and say, quite reasonably, "Gee, we've got enough high-priced hitters who can't play a key defensive position (or can, but not particularly well)."

Cashman might also look at the numbers and say, quite reasonably, "Gosh, only two American League teams scored more runs than we did in 2003, and no American League team scored more runs on the road than we did (Yankee Stadium is a pitcher's park). What's more, our lineup figures to fare even better next season, considering how many injuries we suffered this season."

But Cashman's never actually been in charge of the Yankees, and he's really not in charge now, with three years having passed since the Big Stein got one of those fancy trophies from Commissioner Bud.

My read of the situation is that the Red Sox desperately want to relieve themselves of their $100 million obligation to Ramirez. But why put Ramirez on waivers now, just three days after the World Series?

Because 1) there's only one team that will seriously consider claiming Ramirez, and 2) that team's owner is never going to be more frustrated and more aggressive than he is right now.

Will Steinbrenner rise to the bait? I doubt it.

Ramirez is a great player, of course. If the Yankees had Ramirez, they might reasonably be said to have four of the dozen best players in the league (along with Jason Giambi, Jorge Posada, and Alfonso Soriano). But I suspect Cashman has plans to remake the Yankees' defense up the middle, and the arrival of Ramirez would make that impossible.

In a sense, adding Ramirez would make Cashman's job a lot easier, because then all he'd have to worry about is 1) finding a third baseman, 2) finding two or three (or four) starting pitchers, and 3) almost completely revamping the bullpen. All with no help from the farm system, which has little to offer.

What makes all this so fascinating isn't that the Red Sox have placed Ramirez on waivers. That's just common sense. What's fascinating is that the Red Sox are essentially offering a great player to their sworn enemies, gratis. The reports I've seen mention a number of teams that might be interested in Ramirez, but unless the Red Sox are willing to send a significant sum of money with Ramirez, there's only one team, one owner, that might have serious interest.

Will Steinbrenner take the bait? Probably not. Sure is fun to think about, though. And you have to admire Red Sox GM Theo Epstein for making the first move.