The Giants never had a Gold Glove shortstop before Omar Vizquel. They had Gold Glove winners at every other position during their first 47 years in San Francisco. Just not shortstop.

Perhaps their best defender at the position was a guy scorned by fans because he was such a poor hitter. Johnnie LeMaster once responded to fan abuse by replacing "LEMASTER" on his jersey with "BOO."

The Giants have had some nice shortstops since moving to San Francisco in 1958, including Jose Pagan, Chris Speier, Jose Uribe, Royce Clayton and Rich Aurilia. But Vizquel is a different breed.

Still, when Vizquel joined the Giants in 2005, they were second-guessed for giving him a three-year contract. He was 37 and hadn't won a Gold Glove since 2001, and he was moving to the National League after spending his first 16 seasons with Seattle and Cleveland. 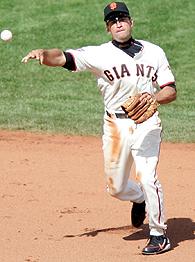 In retrospect, for $12.25 million over three years, the Giants got a bargain.

Vizquel won Gold Gloves his first two seasons, and last year he was the team MVP for hitting .295 with 24 stolen bases and a career-high 10 triples. He also won the Willie Mac Award as the team's most inspirational player.

Vizquel turns 40 on Tuesday, joining Houston second baseman Craig Biggio as the only 40-something middle infielders in the big leagues.

How's he still doing it?

"You mature as a player," Vizquel said. "You acquire more knowledge. You position yourself better. You run the bases a little smarter. Obviously, later in your career, you have the mentality to be a good player, and if you keep working hard, you can continue being a good player.

"It's awesome I could still do it at this age. I just wonder if I had this knowledge at 21 or 22, what kind of player would I have been?"

It's a scary thought. As is, Vizquel has 11 Gold Gloves (second all-time among shortstops behind Ozzie Smith's 13), owns the highest fielding percentage of any shortstop in history (minimum 1,000 games) and is 140 shy of the record for most games played at shortstop (Luis Aparicio played 2,583).

It's hardly time to talk retirement.

"My body will tell me," Vizquel said. "Right now, my body's telling me to keep playing. I feel good. I think I can play three more years."

Vizquel was hoping for a contract extension during spring training, but talks never got deep. No shortstop appears to be knocking on the door at Triple-A Fresno, and Emmanuel Burriss, the Giants' best prospect at the position, is currently playing at Class A San Jose.

Vizquel has made it clear he wants to stay in San Francisco, and it's possible the Giants will re-sign him for at least one more year. It would be a wise move. He's certainly not showing his age, based on the quickness, range, soft hands and, as always, flair.

"It's incredible to watch," said Aurilia, who has returned to the Giants and is primarily playing as a first baseman. "He has more energy than I think I've had in my whole career. He's always bouncing around out there, and he makes everything look routine, which is unbelievable for a shortstop. It looks like he has no body fat. He's in unbelievable shape."

Vizquel says he weighs 178 pounds and that his playing weight has been in the 175-pound range his entire career.

"We're not a big family. We're not overweight," Vizquel said. "But by becoming a professional athlete, [conditioning] is part of your game. I'm crazy for fitness, man. I really like to keep my body in shape. You have to stay fit, agile, flexible, sharp, all these things. If you want to stay a major-league baseball player, you better stay fit.

"It's incredible to watch. He has more energy than I think I've had in my whole career. He's always bouncing around out there, and he makes everything look routine, which is unbelievable for a shortstop. It looks like he has no body fat. He's in unbelievable shape."
-- Rich Aurilia on teammate Omar Vizquel

"I haven't changed anything about my physical appearance. But your mental part of the game obviously got stronger, and that's one of the things that has helped me late in my career."

Early in Vizquel's career, he was among an elite group of American League shortstops including Derek Jeter, Alex Rodriguez, Nomar Garciaparra and Miguel Tejada. The only guy lacking offensive punch was Vizquel, which was why he might have been overlooked at times.

Well, A-Rod is now a third baseman. Garciaparra is now a first baseman. And while Tejada committed a career-low 19 errors last season and Jeter was the AL's Gold Glove winner with 15, Vizquel had four.

And those four are fewer than Jeter already has in 2007.

"The other guys got more pub because of their pop, but we always knew [Omar] could pick it better than anyone," said Giants pitcher Barry Zito, who spent his first seven seasons in the AL. "We always respected Omar, always knew he was the best."

Let it be told Vizquel is no slouch on offense. He has 2,485 career hits, a .275 average, a .341 on-base percentage and 367 stolen bases. Smith and fellow Venezuelan Luis Aparicio both batted .262 in their careers.

Through it all, Vizquel is still a master with the glove, though some will say he has lost a step and some arm strength. He's not buying it. Why should he? Last year, he was the oldest shortstop in history to win a Gold Glove, beating his own record.

"I'm having the best time in my life right now," Vizquel said. "I feel so good inside mentally. My life is completely balanced in all aspects. I think I can play another three years, but that doesn't mean next month I might be all tired and say this is it. You don't know when the time is going to come. You've just got to listen to your body, but right now I feel great."

John Shea is the national baseball writer for the San Francisco Chronicle.