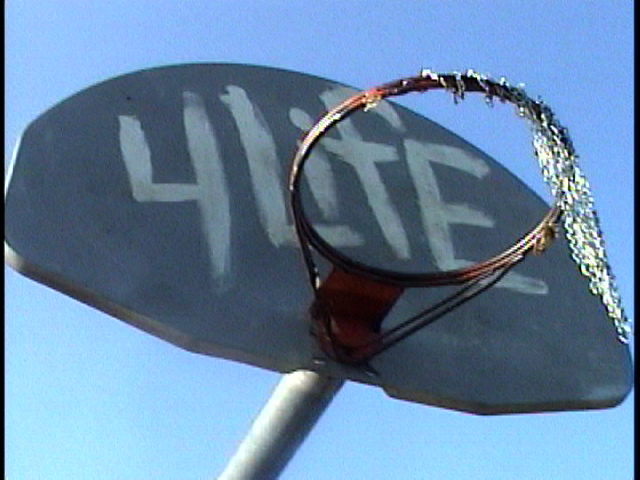 There's a way to play basketball that involves a love and respect for the game. That's all joy and smiles. That's the Magic Johnson approach.

But there are other people who need the game. Really. Like, either the game is going to save their lives, or they're going to get involved in something bad and likely die.

For a lot of people in Flint, Michigan, that's how basketball is, and you can tell by the way they play. That's angry, desperate basketball. That's adrenaline. That's hard. As Mateen Cleaves says, it's a grind, grind, grind.

And it's amazing to watch. Six year olds who can dribble between their legs and hit a fadeaway. Dribble penetration followed by vicious alley-oop dunks. Flagrant fouls that will make you bark out loud as you're watching the DVD in bed next to your sleeping wife.

Marcus Davenport is a young school teacher (as a 31-year-old, I consider 28 young) who spent $30,000 of his own money shooting 72 hours of the most incredibly raw Flint basketball footage you can imagine. He had a camera from Best Buy, and a 1993 Grand Am with a bullet hole in it, and he talked to everybody he could get his hands on who knew anything about Flint basketball. AAU coaches, high school coaches, historians, Pro-Amplayers, NBA players, high school players, and guys in the park.

Eddie Robinson's agent told him to be ready to meet Eddie in the parking lot at 8:30 in the morning, so just to make sure he didn't miss it, Marcus drove there the night before and slept in the car. When he got a better-paying job in Detroit, an hour away, he drove back to Flint every night to "shoot hoops." He'd get home and sleep three hours, then head back to school again. His students saw the red in his eyes, and his crappy car, and assumed he was smoking a whole bunch of pot.

Through dim lighting, off-mic sound, no voice over, and no real narrative, Davenport (who admits he had no idea what he was doing with the equipment when he started out--"I bought a Macintosh G4 with everything for video, and some nights I was just throwing the manual against the wall wondering how I was ever going to figure that out") tells a super real story of basketball. It's called Flint Star.

Before Davenport set up a way to buy DVDs online, he sold them "hand to hand" like crack. If someone called up and wanted one for $9.99, he'd drive there in his Grand Am and drop it off for cash. And everyone in Flint wanted to see it. Which is why almost everyone in Flint bought a copy--from some bootlegger. That's the bad news.

Davenport has seen precious little of his thirty thousand dollars back, even though he used some more of his teacher's salary to pay for TV commercials all over Michigan. He's not the slightest bit bitter about it though, and he has more projects in the works. "I wish I hadn't made some of the mistakes I made," he says, "but it has been an incredible learning experience, and that'll all help me the next time."

And, at least, when he sent a copy to Dick Vitale, Dickie V sent him back a signed copy of his book and a personal response, both of which Davenport keeps in a safe.

He talks about going to Eddie Robinson's house to interview the Bull shortly after he signed a $30 million contract. "Bentleys, Escalades--whatever you could want. It was all there," says Davenport. "You want all these things. But then you go back to the heart of the ghetto and you find kids who don't even have shoes that fit their feet. It's hard to feel too bad for yourself."

As a teacher, he sees the challenges of today's youth first hand. In Detroit, he says, "it was nothing to have middle schoolers with a thousand dollars in their pocket. I had one student, and I was trying to tell that kid about selling drugs, and he said 'Mr. Davenport, what kind of car do you drive? How old are you? How much school did you go to? My cousin is 18 years old and drives a 500 series Mercedes Benz.' I told him that at least I could sleep at night. He said 'OK, like my aunt, who was her whole life and then one night when she was going to work at the factory, somebody shot her dead and just kept moving.' It's very hard. It's a very difficult environment."

"I think the best thing we can do, as parents and as educators, is to put more of an emphasis on education. Like the guy who owns the Pistons, if he asked his son what he wanted to do, and his son said he wanted to be Ben Wallace, he'd probably slap him because he could earn a lot more money in a different career. Kids don't know that they can go to school and be very successful using their minds, as a doctor or a lawyer or something. They just see basketball players and rappers on MTV Cribs and think that's the only way to be successful."

Flint Star is incredibly candid. At one point, some young men of Flint are sitting around in the living room, talking about guys who make the NFL or the NBA, and how they give back by taking everyone out the club, or holding free camps, or whatever it is. Players like Mateen Cleaves and Robaire Smith are praised. What about players who come around in their $400,000 cars but don't give back, someone asks. Is it OK to rob them? People in the room tend to agree. Yes, that's OK.

That's certainly something I'll remember next time I hear about an NBA player giving up his gold at gunpoint.

Those are stories we don't usually get to learn from our TV sets. But they're true, and they're a big untold part of this world of basketball that we all love so much. Choppy, grainy, and jumbled as it may be, Flint Star tells that story as honestly as anything I have ever seen. Foundations should give this man grants to keep telling these stories with such integrity. Well worth a watch.

You can learn more about it here.