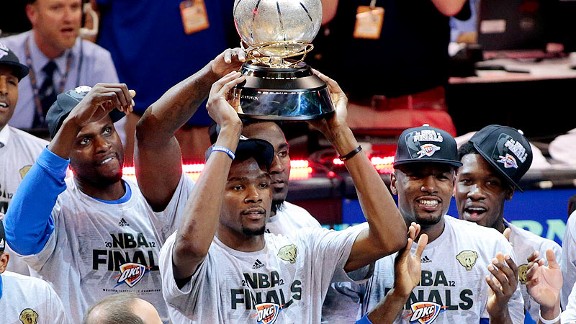 Most have envisioned this night, but it arrived ahead of schedule for the young Thunder.

Very few have doubted that we would witness Kevin Durant in an NBA Finals tee and lid, raising a trophy to a rousing ovation at Chesapeake Energy Arena. Where to mark the spot on the timeline was the only question. When the Oklahoma City Thunder vaulted from 23-59 in 2008-09 to 50-32 in 2009-10, that notch was pushed a little bit closer to the present day.

Still, the prospect of a core this young accepting the prize this soon seemed a little ambitious. Over the past several years, hadn't we accepted the premise that oldsters had the edge in the postseason, and the closer to the mountaintop we crept, the more decisive that advantage?

For the Thunder, as individually talented as any team in the league and one that put up exceptional offensive efficiency numbers in the regular season, they entered the postseason with two primary vulnerabilities -- neither one fatal, but both significant enough to possibly stop the Thunder just shy of the peak. Those shortcomings exposed themselves in Games 1 and 2, and the Thunder looked like a young team with some meaningful work to do before climbing the next rung.

When they arrived home to Oklahoma City, the Thunder began the process of correction. And just like their ascension to the top of the heap, the effects of those adjustments revealed themselves instantly. The ball started to pop across the floor, as Russell Westbrook, displaying a newfound maturity as a playmaker, leveraging his ability to penetrate one-on-one to exploit the Spurs' defensive scheme. And the defense figured out how to deploy its speed and length against an older, slower opponent.

Once the Thunder checked those two items off their list, the mission was complete: four wins over seven days, then the coveted presentation.

Ten days ago, we witnessed something special. Virtually every NBA game features a spurt of some duration by the winning team, maybe a 10-0 or 14-2 run. What the San Antonio Spurs did wasn’t about seizing momentum by stringing together several unanswered baskets. It was the rare exhibition of NBA basketball being played at an almost platonic level.

Since then, basketball junkies even ones with no rooting interest, have asked themselves over the past week, “Where did it go?” and “Will we see it again?”

Rhythm is a fickle condition, with such fine margins. For weeks, an elite baseball player will catch fire and rake. And it seems like he’ll never lose that timing. But for even the best, that timing will scootch away, maybe for just a nanosecond. That’s all it takes to go from Ruth to scrub. It exists not only in sports. It can happen at work, even if only occasionally. You’ll go through a period when you’re ripping through every task with creativity and efficiency, but one day it’s back to the grind, as your performance and energy will return to its natural resting place.

In the first half, the Spurs recaptured much of the magic of Games 1 and 2. Over the first 24 minutes, Tony Parker posted a line of 21 points and 10 assists. San Antonio simplified things for its point guard, allowing Parker to attack early off the dribble, rather than initiate the offense with high ball-screens. The Spurs still picked their spots, an example coming at the 3:25 mark of the prolific first quarter when Parker rubbed Westbrook off Duncan at the nail, then breezed past Nick Collison all the way to the glass.

When the Thunder's defense dug in and Parker couldn't get a sufficient first step, then Parker would go to the pick-and-roll with Duncan. Those yielded solid results before intermission, as well. Just before halftime, Parker used a pick up top from Tim Duncan, then exploited the trap with a quick pass to Duncan. With Kendrick Perkins out on the perimeter guarding Manu Ginobili -- a mismatch the Spurs created in crafty fashion with a sneaky down screen by Boris Diaw off which Ginobili flared to the right corner -- Duncan finished with ease at the rim because Perkins was in no position to help.

Parker also used early screens in the secondary break to get to the hole, as he did in the closing minute of the third quarter to preserve a narrow two-point lead for the Spurs.

When we rank in descending order the best possible outcomes of a San Antonio Spurs offensive possession, "wide-open for a corner-3" tops the list, and the Spurs generates plenty of those opportunities. A gorgeous set at the two-minute mark of the first quarter got Kawhi Leonard, as the ball pinged around the floor. An angle pick-and-roll with Parker and Duncan on the left side yielded a pass to Duncan on the move in the paint. When Durant helped off Leonard, James Harden slid over, but that left Stephen Jackson open. The kickout from Duncan went to Jackson. Once Harden scampered back to Jackson for the close, Jackson dished the ball to the right corner for Leonard's open 3-pointer. A few minutes later, Jackson was a recipient in the weak side corner off similar ball movement.

After halftime, the Spurs were never able to find that rhythm. Against the Los Angeles Clippers, a single half of surgery is enough to fuel the Spurs to a win. But Oklahoma City is an offensive force that usual demands nearly 48 minutes worth and the Spurs weren't able to sustain that magic.

Durant's exploits came as no surprise, though they were still something to behold. His four field goals in the third quater, during which he scored 14 points, were a Whitman's sampler full of sweetness:

There's simply no place on the floor where Durant can't dominate not only a one-on-one matchup, but anything other than the most perfectly coordinated defense, one reason he's making his case as the best player in the game. Once he elevates the defense to an all-NBA level, he should be there.

The Spurs contained that offensive force in the first half with understated, detailed-oriented work. 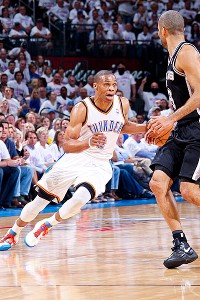 An example: Late in the first quarter, Kawhi Leonard anticipated a Collison screen off the ball before it happened. When Leonard saw it coming, he quickly squirted away to deny Collison the action. In doing so, Leonard lessened the Thunder’s advantage on the possession -- not a lot, but when you get two or three subtle victories in the half court, all of a sudden that advantage tilts more and more to the defense as the possession ticks away, producing no clean looks. On that same possession, the Spurs’ help defender demonstrated the same kind of anticipation when Westbrook beat his primary cover off the dribble, the penetrated into the lane. The possession yielded nothing for the Thunder because the Spurs' defenders were in the right spots early.

Gradually, Westbrook began to make plays. He looked pass early, even when he's able to reach the paint on penetration. Westbrook also thrived in the role of traditional point guard in the pick-and-roll. He and Durant choreographed a gorgeous set at the 5-minute mark of the third quarter. With Stephen Jackson, Durant's man, showing out, Durant took off to the basket through the lane. Westbrook delivered a pinpoint pass to Durant en route, an Durant slammed it home without a dribble.

Where was the help? Perkins was lifted to the perimeter, just far enough away to make the commute for Duncan too far to challenge Durant at the rim. On a couple of occasions, the Thunder were able to use this tactic -- lifting Perkins to the outside -- to create space to attack. On a crucial possession late with the Thunder clinging to a four-point lead, Westbrook escaped back door. Harden hit him with a bullet pass and Westbrook was able to convert, and-1, because the help was up top.

Two effective strategies in one play -- a smart tactical choice by moving Perkins out of the paint, and by cutting Westbrook to the basket from the weak side.

Westbrook has such a breadth of talents, so much potential to be one of the elite multi-faceted guards in the game. Even with a few subpar shooting games in the series, one of the biggest takeaways from the six games has been his maturation as a complete player in the biggest games of his life.

"It's a make or miss league," is one of the least satisfying clichés in basketball, but down the stretch, the Thunder converted while the Spurs didn't.

Over a three-possession stretch inside of five minutes with the Thunder trying to preserve its narrow lead, Derek Fisher and Harden each drained game-changing 3-pointers. How Fisher got open in the left corner is an apt illustration of how far the Thunder's offense has come. Oklahoma City wanted that wide weakside pin-down for Durant, but he was well-guarded by Parker. But Durant has been so devastating coming off that action that Gary Neal helped off Fisher before the pass from Harden to Durant was even attempted. It never was because Neal's anticipation left Fisher open. Harden decided to dish that way, and Fisher drained it.

Harden's 3-ball a moment later was a product of more savvy, veteran-style offense. Again the Thunder were looking for Durant on that wide weakside pin-down. And again the Spurs defended Durant well, as Durant had to retreat above the arc to receive the pass. But here again, Durant's capacity to pressure the defense with a dribble-drive yielded a clean look. Once Durant revved up for his dribble-drive, Leonard cheated off Harden. When Durant kicked the ball out to Harden, Perkins was there to screen Leonard from closing. Bingo -- Thunder by six with just over three minutes remaining in a close-out game.

Regarding Fisher, who was a surprise member of the stretch-drive lineup, his presence on the floor worked out. He's still a liability defensively, but here’s another facet of how the Thunder’s team defense has come together. Smart teams cover for weaker individual defenders. Teammates send help promptly and are mindful of where a guy like Fisher is going to funnel his man. The elite Cleveland Cavaliers teams were able to do this for Mo Williams. The Chicago Bulls’ big men understand their heightened responsibility with a few average-or-below defenders on the floor. When a team can accomplish that, it gives them a whole lot more flexibility in their rotation.

Meanwhile, the Spurs were less sure of what they wanted. Duncan turned the ball over on an errant cross-court pass inside of nine minutes. That roll for Duncan that came easy in the first half was snuffed out by a quicker, smarter Thunder defensive rotation. That triggered a string of rough possessions. A 50-50 call resulted in a charge on Ginobili, which erased a potential 3-point play. On the next possession, Diaw couldn't hold onto the ball underneath (the possession amounted to a two-man game between Leonard to Diaw, a low-grade option in a critical possession). Then Ginobili missed the sort of 3-pointer he made in the first half.

On the defensive end, Duncan lost a rebound to Westbrook, and the second chance resulted in a pair of free throws for Westbrook. Then, just after the midway mark in the fourth with a chance to trim a four-point deficit, the Spurs found another clean look for Leonard in the corner. The instant before Leonard's shot fell through the net Duncan was whistled for an offensive foul underneath the basket.

With the clock boiling down inside of a minute, the Spurs simply couldn’t drain shots that were falling in the first half.

The looks were relatively clean -- championship teams find what they want when the game is on the line.

Nothing fell. And when the results aren't there, there's little solace to be gleaned from the process when it ends in elimination.