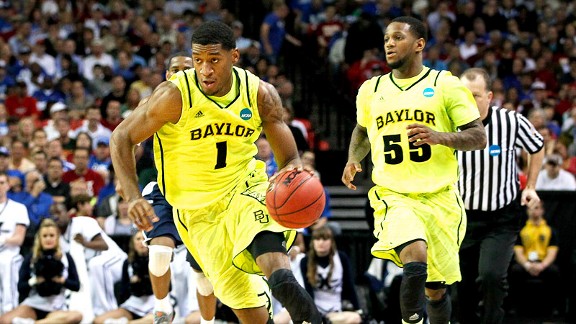 Perry Jones has scary talent and size, but there are questions about his motor.

Endless questions swirl around Perry Jones III, the highly rated prospect from Baylor. At 6-11 he has a guard's handle, but what position does he play? Who will he guard? Can he shoot well enough to play on the perimeter?

But the most pressing questions are about his motor, as in, why doesn't Perry Jones play harder, more assertively?

On Hardwood Paroxysm, James Herbert interviews Jones' trainer, who says he has some answers:

“I think they’ve got that wrong,” said the Harvard graduate who worked with elite athletes at the U.S. Olympic Training Center before opening his own facility in Santa Barbara, California. “I don’t even know what that is: ‘A weak motor.’ I’ve heard that around him now over these last few weeks quite a few different times and I don’t know quite what that means. Is that like lack of effort? Does it mean not a lot of drive? Does it mean he can’t work at a high level for a long period of time? I don’t know. I don’t think any of these things are going to be true with this kid.

Elliott has worked with Jones for the last month and a half, preparing him for the Chicago pre-draft combine, team workouts and the leap to the next level. What he found was a mechanical issue, not one involving a lack of heart, desire or focus.

“When you create force for any kind of athletic movement out of your lower half — whether it’s jumping or sprinting or cutting — you use a combination of force generated from the ankle, the knee and the hip. We call those ‘force moments,’” Elliott said. Jones’ problem is that he was creating a bigger force moment over his knee than was desirable. His work at P3 has been about shifting his incredibly powerful force moments to his hips. While “motor” is a murky term, sports science showed something specific: His movement pattern put too much pressure on his knees to produce maximal force on a consistent basis. Perry’s smooth athleticism made everything look easy, but it was not.

I don't doubt that improving his functional mobility can make Jones more consistently explosive. But does anyone really question whether he's athletic enough to play in the NBA?

Jones’ trainers aren’t just working on his mechanics, they’re working on his sales pitch. If a team's general manager is torn on how to evaluate Jones, perhaps the right pitch can help make him a believer.

Motor may be elusive to define, but it doesn't mean it doesn't exist, or that we couldn't measure it. A simple test measuring a players' heart rate under game-like conditions in practice would create the necessary baseline to see how hard they are working during games. In crude terms, players who work harder for more of the game have high motors.

And for all of Jones talent, there's no doubt he's something of a tweener, a player who will need to stake his own identity on the court. If Jones drifts for 10 minutes in an NBA game, he may never see the ball.

The tweeners who thrive in the NBA all share one skill: a tremendous work rate.

6-7 center DeJuan Blair doesn’t even have ACLs, but no one ever wondered if he was playing his hardest. Paul Millsap is an undersized power forward who forced his way into Utah's starting lineup with his relentless rebounding.

Ditto Kenneth Faried, one of the big surprises from last year's draft. Faried is four inches shorter than Jones, can’t dribble or shoot and is not especially savvy as a defender. Teams hardly thought he was a sure thing, as evidenced by his selection at 17th overall.

But oh man does he hustle! And when does that ever go wrong? Is taking that kind of player really a risk?

Any team that drafted Faried was going to get the hardest working player in the draft, and that effort ultimately made him one of the most effective rookies in his class.

Working the way Faried does is the one skill that can make all the other skills look better. In college, Jones' motor tended to give the opposite impression.

But like any skill, motor can be improved with deliberate practice, which means Perry Jones' career is very much an open question. That's frightening to general managers drafting in the top 10 but more palatable to those with a mid-to-late-first round pick.

Despite protestations to the contrary from his camp, history shows that whether Jones makes the leap from scary to scary good will have little to do with his vertical and a lot to do with motor.