Once again, the Milwaukee Bucks are dominating the regular season. They have the MVP front-runner in Giannis Antetokounmpo, the league's best record and the best statistical markers in the NBA by a mile.

Still, after last season's disappointing collapse in the Eastern Conference finals, many remain skeptical. Remember, the Bucks dominated the 2018-19 regular season too.

So, what's different about this team as it gets ready to face the Golden State Warriors on Wednesday (10 p.m. ET on ESPN)? What makes it a more serious threat to come out of the East and win it all?

There are four major differences to consider. Let's start with the best player in basketball.

Defining stat
In 72 games last season, Antetokounmpo made 52 3s. Through 35 games this season, he already has drained 59.

Over the past few seasons, Antetokounmpo has become the league's most dominant interior scorer since Shaquille O'Neal was in his prime. But this season he has become much better from downtown.

He has gone from a terrible 3-point shooter to a mediocre one. Though that might sound snarky, it's not. The progress is real, and if it continues, it will launch Antetokounmpo's offensive game into the stratosphere.

The road from bad to good has to pass through mediocre. That's exactly what's happening with Giannis' 3-point shot: 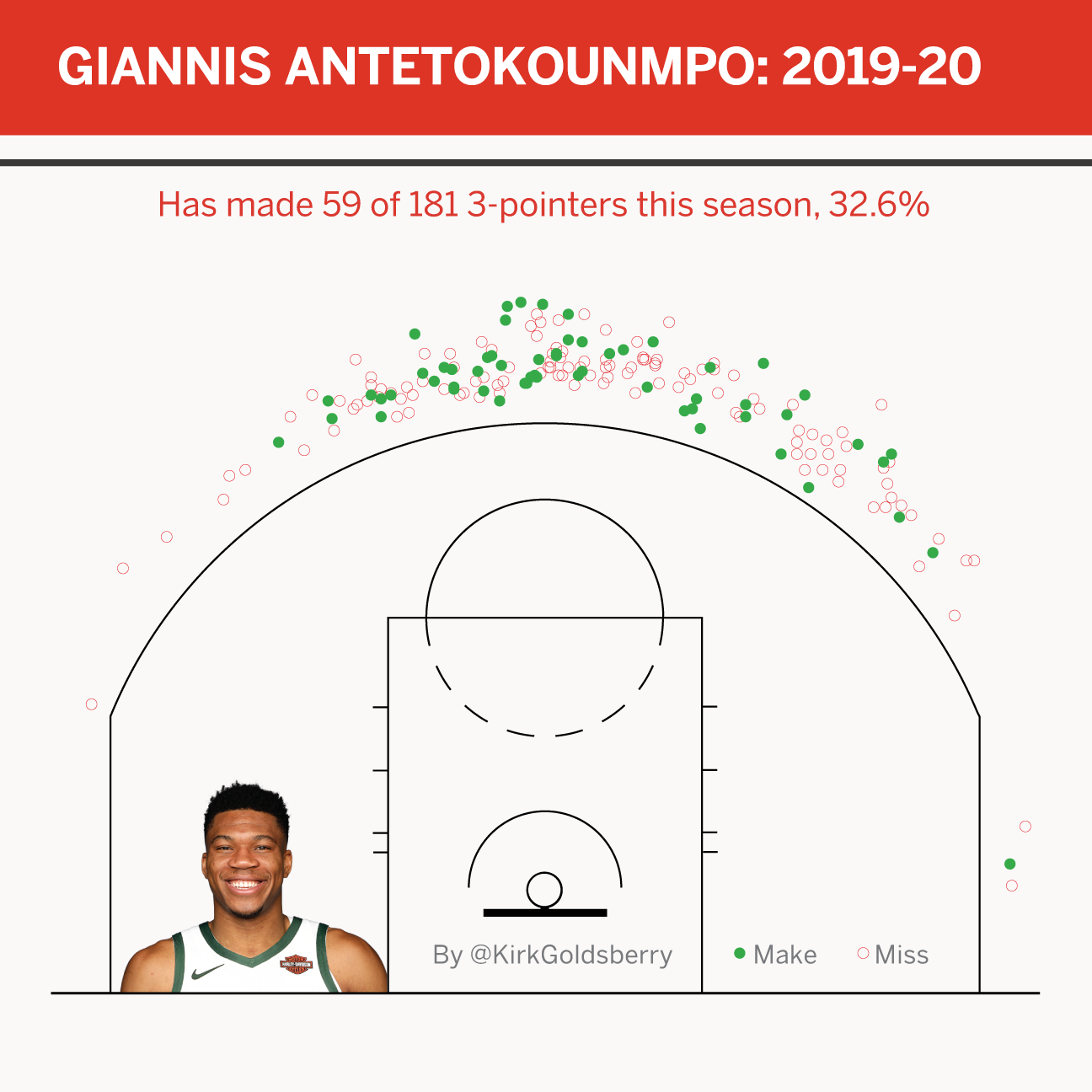 He's shooting 32.6% on 5.2 3-point attempts per game. Those numbers would be low for most NBA superstars these days, but they're monumental for Giannis and the Bucks, who have spent endless hours developing Antetokounmpo's range. He's already among the most unguardable scorers on the planet -- racking up 30 points on 20 shots per game -- but if he becomes a legitimate threat from 3-point range, it will make him and the Bucks nearly impossible to defend in the future.

Together with assistant coach Ben Sullivan, Antetokounmpo has been hyperfocused on developing his 3-ball. That focus was on full display Monday in San Antonio, as the pair worked through their highly structured 20-minute pregame vitamin that focused largely on shots from beyond the arc. Even Tim Duncan was captivated.

That might sound cliché, but it's important in this context: Jason Kidd, who coached Giannis during his early years in the NBA, told the young star to stop shooting 3s after his rookie season.

That stunning directive stunted his growth at a key time in his developmental window. According to Sullivan, Giannis now has the green light to shoot 3s whenever he wants. Antetokounmpo only gets sassed when his coaches think he passes up a clean look from downtown.

If Giannis brings even a league-average 3-point shot to the 2020 playoffs, that burdens opponents with one extra thing to defend.

Unlike some of the other NBA title contenders, the Bucks are very good whether or not their superstar is on the court.

Defining stat
With Giannis off the floor, the Bucks are posting a net rating of plus-6.8 points per 100 possessions, which would rank fifth in the NBA overall. Their defensive efficiency of 103.3 when Antetokounmpo sits would be No. 1 in the league overall.

The fact that Milwaukee thrives when Giannis is resting means Milwaukee can seek out more opportunities to save his legs. It also gives the Bucks a rare edge across the league.

Contenders with No. 1 option on the bench

The Bucks play well for all 48 minutes, especially on defense. Their defensive concepts are working both with Giannis in and out of the game largely because their roster is stacked with talented and willing defensive players.

The addition of Robin Lopez has enabled the second unit to mimic the interior prowess of the starting group. Meanwhile, perimeter bench players Donte DiVincenzo and Sterling Brown are actually posting better defensive ratings than Antetokounmpo. The 2018-19 Bucks were good without Giannis on the floor, but these Bucks are even better.

The Bucks protect the basket better than any other team in the league, and it's not even close.

Defining stat
Milwaukee holds teams to a pitiful 51.7% shooting at the rim, by far the best such defensive mark in the NBA. Toronto has the next-best mark at 56.3%.

How do they do it? Look no further than Giannis and the Lopez brothers.

Here's the most absurd stat of them all: So far this season, 66 players have defended at least 100 shots at the rim, per Second Spectrum tracking data. Of that group, Antetokounmpo ranks first, Robin Lopez ranks second and Brook Lopez ranks third in opponent FG% allowed.

Remember when the Warriors trotted out three of the best shooters in the world? Well, this season's Bucks squad trots out three of the planet's best rim protectors. The Bucks' staggering defensive numbers are the result of a perfect blend of system and personnel. They pack the paint by design, and the folks they pack it with are world-class deterrents.

Even if the Bucks' offense has an off night, the defense will keep them in games. But the offense doesn't have many bad nights. Milwaukee is on pace to become just the third team since 2000 to rank in the top three in both offensive and defensive rating.

Those 2014-15 Warriors offer an interesting precedent. After losing in the first round to the LA Clippers in the 2014 playoffs, the Warriors ran the table the next season, then proceeded to win the West every year until this rapid collapse in 2019-20.

Antetokounmpo was 24 and Budenholzer was in his first year in Milwaukee when they lost in the conference finals. Considering this franchise failed to make it out of the first round every year between 2001 and 2018, that's a triumph. But NBA discourse isn't always dominated by rational observers, and with Antetokounmpo's free agency just 18 months away, patience is not on the menu.

Milwaukee will need these four trends to continue into the postseason to get past the other Eastern Conference challengers and give Antetokounmpo every reason to re-sign in July.