MOBILE, Ala. -- They held the first Senior Bowl practice Monday in weather more suited for London than the Gulf Coast. The wet, chilly conditions caused the art of the center-quarterback exchange to elude the North team. 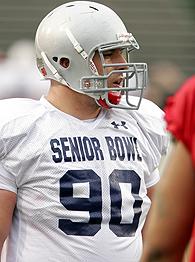 On one of several occasions when Pittsburgh quarterback Tyler Palko stepped back from the line without the ball, a mad scramble ended with Ohio State defensive tackle David Patterson holding the ball aloft in his right hand.

As Patterson and his unit in the seven-on-seven drill stepped out, he got a congratulatory tap on the helmet from a North teammate.

Who started alongside Patterson since the middle of the 2004 season.

And co-captained the second-ranked Buckeyes alongside Patterson in 2006.

"Toward the end of the season," Quinn Pitcock said, "we realized this would be a special opportunity that we would get to play together, along with [quarterback] Troy Smith and [center] Doug Datish. It was a very special moment."

After four years together of sweating and bonding, a week at the Senior Bowl is a bonus, one last opportunity to play together. But for the four pairs of teammates on these two rosters who share not only a school but also a position, it's also a head start on the competition this week.

Pitcock's acknowledgment of Patterson illustrates everything about how these teams are thrown together. For the first time since they arrived on their campuses, the Senior Bowl players are in an unfamiliar locker room. They want to practice well and look polished for this first NFL audition even as they attempt to perform duties from a playbook handed to them 24 hours before.

Pitcock and Patterson have lined up next to each other so often that they could rush the passer blindfolded and not bump into one another.

"When we wanted to run a stunt this year," Patterson said, "we could just look at each other, look at the offense and how they lined up, and get the stunt going." 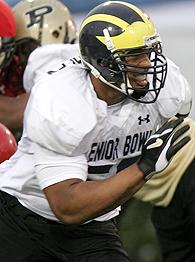 There would have been a fifth pair, but Notre Dame receiver Jeff Samardzija canceled his plans to join Rhema McKnight at the Senior Bowl and signed last week to pitch for the Chicago Cubs.

"When everybody is on the same page, it makes everybody's job easier," Harris said. "I never worry about Prescott's job responsibility."

"David's got my back and I got his," Burgess said. "I played safety for four games as a freshman. I knew him a little bit. When I moved to linebacker, that's when we came together as best friends."

The advantages on the field are obvious. But the advantages extend to the rest of the week, as well. No one wants to admit in front of his fellow All-Americans and first-day draftees that he doesn't understand something. You can do that with a teammate.

"It's easier to talk to somebody you know after the meeting," Pitcock said. "You try to figure out, 'Oh, I see what the coach was talking about.'"

Huskers Moore and Carriker combined for 13 sacks and another 20 tackles behind the line this season. Occasionally they lined up next to each other, with Carriker playing the three-technique. More often they both played end.

"We just know how each other worked and had a lot of feel for each other," Moore said. "People ask if we're competitive. We're extremely competitive. We weren't trying to race the other one. It was something just understood. If one of us did something, the other would say, 'Now it's my turn.' It was a constant battle to see who could do the best. We never talked about it. I felt it. He did, too. We're naturally competitive."

Carriker recalls meeting Moore on their first day in Lincoln in the summer of 2002. "Big ol' hair and a big ol' smile," Carriker said, a smile of his own creasing his face. Five years later, they are wearing the red "N" on their white helmets for the last week. Barring 32-to-1 odds that one of these pairs will be drafted by the same team, these players are playing together for the last time, too. 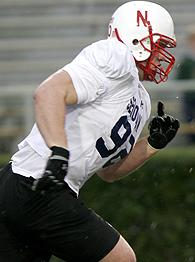 Burgess set his sights a little lower. He and Harris are joined at the Senior Bowl by Wolverine teammates Lamarr Woodley at defensive end and Leon Hall at corner.

"I hope we all get on the field at the same time," Burgess said.

It couldn't have been coincidence that none of the three twosomes on the North defense lined up together in the seven-on-seven drills Monday. It was probably just a way to prevent confusion as the coaches learn the players and the players learn the plays. By Saturday, the Tampa Bay staff coaching the North and the San Francisco staff coaching the South will have found their best combinations.

It only makes sense that they will include some similar helmets lining up side by side.