But within the great shadow cast by the Canadian phenom, there are players whose NHL futures are every bit as rosy as Crosby's. One of them is American defenseman Jack Johnson, who has been a close friend of Crosby's since the two were young high schoolers in Minnesota and who has been visiting Crosby in his hometown of Cole Harbour, Nova Scotia, leading up to the draft.

Do the two of them get recognized when they're at the local Tim Hortons coffee shop?

"Everywhere we go, stopping in at Tim's to get a coffee, someone's always stopping him to ask for his autograph," he said. "I'm just the guy next to him."

That kind of anonymity isn't new to Johnson, but it might become a part of his past Saturday, when he likely will be selected with the second overall pick by the Anaheim Mighty Ducks.

"He's probably as physically gifted a player as there is in this draft," said David Quinn, Johnson's former coach with USA Hockey's National Team Development Program and now an assistant coach at Boston University. "He's so agile on his skates. He's got great lateral movement. All he wants to do is be a great player."

At 6-foot-1, 201 pounds, the 18-year-old Johnson has been compared to Scott Stevens and Denis Potvin. His heavy shot is outweighed only by his heavy hitting. As a 17-year-old, Johnson played above his age group and helped the U.S. Under-18 team to a silver medal at the 2004 World Championships. Earlier this spring, Johnson and the U-18 team completed a dramatic undefeated run through the 2005 tournament with a 5-1 thumping of Canada in the gold medal game.

Johnson flew under the radar, given the MVP performance turned in by U.S. forward Phil Kessel (16 points in six games), yet the well-spoken blueliner is considered by scouting services, including the NHL's Central Scouting and the independent Red Line Report, as the top defenseman in the draft.

"If Jack Johnson was a Canadian, north of the border they would be singing his praises. He'd be a highly visible player," said Ken Martel, director of player personnel for the National Team Development Program.

But you won't find anything approaching envy or bitterness when discussing Crosby's profile with Johnson.

"I get enjoyment out of it. The attention he gets, he deserves," Johnson said. "He didn't just roll out of bed and get it. If I'm going to be in anyone's shadow, I want to be in his." 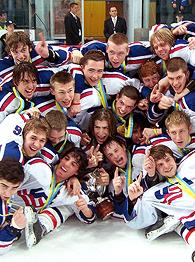 Crosby and Johnson, who played together at Shattuck-St. Mary's prep school in Faribault, Minn., were the only 10th-grade students on the school's midget team that won a national championship.

Johnson said he has learned a great deal about preparation and dealing with the pressure of stardom from watching how Crosby has handled himself.

The two talk three or four times a week and plan to sit together at Saturday's draft in Ottawa if the circumstances of the abbreviated event allow. The two will also take part in a clinic for local minor hockey players the day before the draft.

Some time ago, the two friends quietly pledged to follow each other to the podium as the top two players in their draft class. They planned in the way teenagers plan these things, for the photo op, arms around each other's shoulders, wearing the jerseys of their new teams. It is a plan that has every chance of coming to pass.

Born in Indiana, Johnson got started on his part of the plan after his family moved to suburban Detroit. His mother, Tina, knew hockey would be part of her son's life when he first took the ice as a preschooler.

"He just stood up and started across the rink. There was no falling down, no holding onto the boards. He just did it as if it was the most natural thing in the world," she said.

From the time he was 9 years old, Johnson has attended summer hockey camps at the University of Michigan, and he told legendary coach Red Berenson early on that he would play for the Wolverines someday.

Johnson was invited to the Select 15 Festival, a gathering of the top pre-junior players in the United States. When the event was over, Johnson was asked by Quinn to join the NTDP program in Ann Arbor, Mich. The 15-year-old then was offered a scholarship by Berenson.

"There aren't many kids you'd make that kind of commitment to," said Berenson, who calls Johnson the "complete package."

With four senior defensemen leaving Michigan this offseason, the expectations are already high for Johnson to step into one of the most demanding programs in NCAA hockey.

For a young man who just turned 18, it would be easy to become consumed by the perks of his position -- the travel, the possibilities that lie ahead.

But Johnson knows the sacrifices that have been made to get him to Saturday's draft. His family has been willing to sacrifice its own stability, but not its togetherness, to give him every chance to succeed in hockey. Although the plan was for Johnson to live on campus at Shattuck-St. Mary's, his parents quit their jobs and moved to a house across the street from the school's rink. When Johnson was recruited by the NTDP, the family was uprooted once again.

"I think about it all the time," he said. "If all this stuff works out, it's all because my parents got up at 4 in the morning to take me to skate before school started. I wouldn't be here if it weren't for them. I owe so much to them I'll never be able to make it up."

In some ways, he repays them with the time he spends with brother Kenny, now 6, playing hockey in the driveway or at the local rink.

"I love to watch him skate. I'm hoping he'll end up being better than me," Johnson said.