SANTA CLARA, Calif. -- With uncertainty surrounding whether fans will be able to attend NFL games this fall because of the coronavirus pandemic, the league has begun planning for a massive revenue shortfall that will negatively alter the future salary cap.

This comes at a particularly difficult time for the San Francisco 49ers, who will have 23 unrestricted free agents after the 2020 season and have more than $170 million in salary cap money tied up for next year. A cap that was expected to surge into the $215 million range from its current number of $198.2 million could now be as low as $175 million, though there is potential for it to be higher based on additional revenue.

So how do the 49ers keep their Super Bowl window open with so many free agents on the horizon?

"Is it going to be a challenge? Absolutely," 49ers general manager John Lynch said. "For us, I think the biggest challenges, we were set up with a really good roster, but we had set it up such that we really felt it was sustainable. I think it's still sustainable. We're going to have to get creative, though, and we’ve got to figure some things out. You weigh that, along with everything else that this offseason brought in terms of these new protocols and everything, but it has left for a lot more uncertainty than you're used to in this league. That's been difficult." 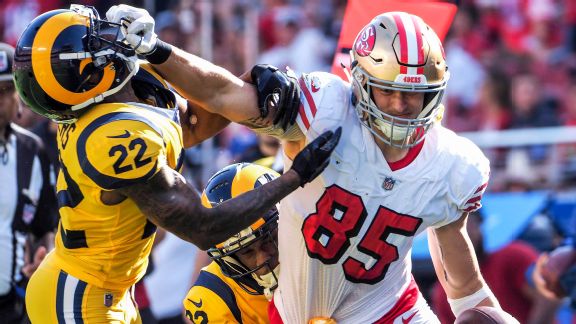 The Niners just opened their winning window in 2019 and already spent this offseason making difficult decisions to make sure it stays cracked as long as possible. That meant swallowing hard and trading away defensive tackle DeForest Buckner, allowing receiver Emmanuel Sanders to walk in free agency and keeping future draft picks rather than getting involved in the bidding for safety Jamal Adams.

Headlining the team's list of free agents in 2021 is tight end George Kittle, the face of the franchise who was recently rated by fellow players as the NFL's seventh-best player. The Niners and Kittle have been trying to hammer out a deal for months, but that hasn't happened because of the uncertainty created by the pandemic and they're trying to figure out a suitable amount of money for a tight end seeking to be paid above and beyond historical standards at the position.

Despite the lack of a deal, Kittle reported to camp on time, did not opt out and has shown little interest in a holdout.

"We don't have to say how important George is to us, and not only as being the best tight end to me in the league, but also the type of person he is," coach Kyle Shanahan said. "So we're doing everything we can to get that done. ... I feel really good about this going forward and I feel very optimistic about it. Hopefully, something will happen sooner than later."

Getting Kittle signed would give the 49ers some cost certainty as they figure out how to retain so many other key players. Cornerback Richard Sherman, offensive tackle Trent Williams, fullback Kyle Juszczyk, nickel corner K'Waun Williams, strong safety Jaquiski Tartt and defensive tackle D.J. Jones are a handful of the big names who are scheduled for unrestricted free agency. Linebacker Fred Warner will also be eligible for an extension for the first time after the 2020 season.

Sherman, who represents himself in contract negotiations and serves on the NFLPA's executive committee, said the drop in cap is "a bit of a concern" for him and his fellow free agents but he's not fretting yet because there remains a high degree of uncertainty surrounding all things when it comes to football this year.

"A lot of our projections, we were projecting conservatively," Sherman said. "If everything goes bad, there's zero fans in the stands, there's no concessions, there's no revenue from that regard, which is extremely doubtful. There are obviously teams and stadiums and states that are open to having fans in the stands. So honestly, we won't know what reality is until the season's up -- or throughout the season, you see how many fans there are, you see how the world adjusts to COVID in that regard. ... You control what you can control and you let the rest sort itself out."

If there's any good news for the Niners here, it's that every team will have to deal with the expected shortfall, and there are teams in far more precarious positions. According to overthecap.com, there are 15 teams with more money committed to the cap for next year than the 49ers, a group that includes other top NFC teams in the New Orleans Saints, Philadelphia Eagles, Dallas Cowboys and Green Bay Packers.

"We're all playing from the same rules," Lynch said. "Are certain teams better positioned to stomach that? Probably, but we'll figure it out. We're confident that we will."