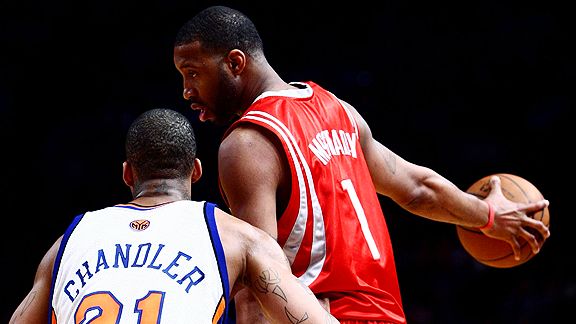 Tracy McGrady's not the same player he used to be, but he's also not useless.

Ten things to know about Tracy McGrady, on the day that he has been traded from the Houston Rockets to the New York Knicks.

Tracy McGrady is enjoying an annual salary this year of about $22.5 million. Despite the surprisingly nice things we're about to tell you about his current abilities on the court, this, of course, is what the Knicks really prize. Once his current deal is done, the Knicks will have a lot of cap room for next summer. How much cap room? Larry Coon wrote on a New York Times blog that they'll be flirting with being able to sign two max players, if they let All-Star David Lee go for nothing. Will it work? Presumably a premier free agent like LeBron James, Dwyane Wade or Chris Bosh will not come to the Knicks to star on a bad roster. All of those players can do that or better on their old teams. New York's strategy would seem to hinge on getting two of those stars to come to town to play together. The McGrady deal is the Knicks' best chance of making that happen, but it's no sure thing. If they fail to lure two key free agents, the cap space may be best used taking on lop-sided trades a year from now, when teams will presumably be looking to ditch salary in anticipation of a new, more restrictive collective bargaining agreement. But the last things Knick fans want to do is wait more.

2. The Knicks brass will say he's here to play

McGrady has played just 46 minutes over six games -- all in December -- in Houston this season, and had a PER of 12.8. That number is a far cry from his career best PER of 31.0 in 2002-03, but still not bad for somebody working off a lot of rust. First, he was recovering from microfracture surgery he had about a year ago. More recently, he has been benched in deference to a broken relationship with the Rockets' brass. Nevertheless, his six games seem to indicate he still may be an NBA player -- even if he's nothing like the one that was famous some years ago.

I spoke to three NBA professionals who know McGrady's game well, and have extensive notes based on their observations. Then I found that Rahat Huq of the TrueHoop Network blog Red94 had already nailed it: "Even when healthy, scoring inside has been Tracy McGrady's Achilles heel since I have been following him. Hard to believe because we all remember the dunks from his younger days. As he has aged, most likely out of fear, he just simply avoids driving to the basket at all costs. This includes the fourth quarter of Game 7's with opponents in the penalty. If you look at my game analysis during his return, he did valiantly try to drive to the hole on certain occasions, much more aggressively than in years past, most likely in hopes of assuaging the concerns of watching eyes. The problem was that he simply did not have even a modicum of explosion. That could possibly change as the leg builds strength, but his fear of contact will not."

4. Do expect a top-shelf passer

Again, Rahat Huq: "Primarily what he brings, contrary to popular belief, is passing. For McGrady, the passing will always be there -- he's the best passing wing this league has ever seen, rivaled only by LeBron James. It was remarkable to see that even in his regressed state, he could still effectively create plays for his teammates. Just absolutely remarkable. He can hold the ball at the key, in stationary position, and blindly hit cutters without needing to actually beat his man off the dribble. He also never makes mistakes."

Rahat's comments are part of a dialogue with Knickerblogger's Mike Kurylo, who says McGrady's passing abilities could help the Knicks by empowering Mike D'Antoni to bench Chris Duhon, who has been bad this year: "Playing McGrady out of position isn't as much of a problem for New York. D'Antoni can have the offense run through anyone; at times David Lee will have the ball on the top of the key or the extended elbow and the decision making will lie with him. Additionally, the Knicks' defensive schemes have a lot of switching, so individual match-ups don't matter as much. McGrady can play the point on the offensive side of the ball, but still defend a guard/forward. In this respect losing Jared Jeffries hurts, because he could guard any spot 1-5. However, New York can use other players to guard opposing point guards. In essence it seems if D'Antoni wants, he can use McGrady to send Duhon to the bench for good."

You need no excuse to watch the video of Tracy McGrady's miraculous assassination of Bruce Bowen and the San Antonio Spurs. He has been traded? OK! Cue it up again! And note in the post-game interview when he says: "My will just took over and was knocking down shots for me." See how he's very clear that his will is distinct from him? As if the two of them could be separated? And, in fact, sometimes that happens ...

There are dozens of low points in the history of McGrady's relationship with the Rockets. One that seems to have stuck in many people's memory was the Jan. 2, 2009 game in Toronto. I just watched much of it, and it's remarkable -- with the exception of one drive to the hoop, McGrady really didn't do one vigorous thing all game. It's like he was made of jello. He sashayed through the night. The hard things about hoops -- the boxing out, the sprinting, the cutting, the rebounding (and, you know, the caring) -- he simply was not doing. Instead, he'd trail his teammates up the court and then hoist a 3 as soon as they passed it to him. The psychic toll on the rest of the roster must be incalculable. The Rockets had just 49 points as a team at the end of the third quarter. McGrady had made two of his nine shots, and let the Raptors do whatever they wanted when they had the ball. He did not get back into the game. A little more than a month later, he was done for the season.

8. Not athletic enough to star

In his heyday, McGrady could score from 3-point land, at the rim in traffic, cutting to the rim, off the dribble, and rising high above defenders for a soft jumper. Just about all of those require some degree of athletic explosion. From here forward, those won't be his go-to moves. However, he is still effective at catching and shooting. In other words, injuries have turned a star into a role player. In keeping with that trend, during McGrady's six games this season, many observers noted his consistent effort on defense. Players without enormous physical gifts need to earn playing time with effort, something he seems to understand. Also worth noting: Rockets sources say that this season, McGrady has been more or less gung-ho about strength and conditioning, which is a positive sign.

Off the court, Tracy McGrady has been something of an enigma. But he has been a serious participant in a major project to help the children of Darfur, which is featured in an excellent documentary.

Tracy McGrady has an unusual attachment to sleep. It has been written about many times. He can sleep anywhere, and does. My favorite part of FreeDarko's "Macrophenomenal Pro Basketball Almanac" is the chapter on McGrady, which is online in beautiful full color. One of the charts shows something amazing: From 1997-2002, when he was childless, McGrady's field goal percentage was essentially the same, no matter how much rest the team had between games. Since his first child, his field goal percentage has been heading south on the second night of back-to-backs. Without kids, he made better than 45 percent of his shots on the second night of back-to-backs. As a parent, he's mired at 40 percent. Is it the sleep? Who knows. But it's something.