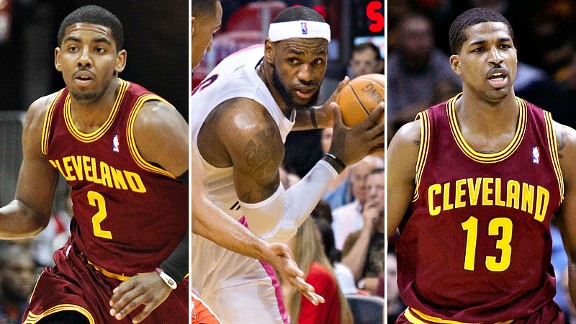 On the topic of LeBron James, Cavs rookies are more mature than most.

There's a narrative out there that LeBron James is childish and foolish, and real deal longtime Cleveland fans could teach him a ton about what it means to be a real adult.

I'm going to pick almost randomly on Joe Tait here. (So many to choose from.) Tait's the longtime and much beloved Cavaliers' radio announcer, who recently retired and, as it happens, published a book, co-written with Terry Pluto. The book is called "Joe Tait: It's been a real ball."

Books by team broadcasters can be a bit saccharine, but not this one! Tait unloads on all kinds of stuff and when the topic comes to James, he is by and large even-handed. There is real respect for James in this book. But Tait entirely shuts the door to the idea that James might ever be able to offer life lessons of any value. Instead, in discussing James, he makes analogies about children, the insane, or criminals -- all of whom could use advice from someone like Tait:

Meanwhile, in the bigger narrative of James and Ohio, I can't help but feel that the real script is flipped. From what I can see, the younger people involved -- in this example James and rookies Cleveland rookies Kyrie Irving and Tristan Thompson -- have scored almost all of the maturity points.

Yes, James tweeted something childish about karma, and after a year of the most vile, and cutting, often racially tinged criticism by the truckload, he said something about his critics having to go on with their sad lives.

But James has mostly taken the high road, or at least the silent one, in the face of an ugly ongoing vitriol. If I were James, I'd take these comments from Tait as entirely insulting. Yet they are mild compared to what has made it into print about James. But is it OK for adults to liken one another to children, inmates and teenagers in AAU who need advice?

It's OK, I'd argue, only if you buy into a childish need to demonize James.

Meanwhile, delightfully, as Kyrie Irving himself pointed out on draft day, and Brian Windhorst reminds us today, those rudderless "young millionaires" Tait was worried about aren't playing that game. LeBron James and the Cavaliers' ascendant rookies Kyrie Irving and Tristan Thompson ... they have been friends for years. They root for each other's success. They respect each other. And Thompson and Irving have developed tremendously well as players, Irving says in part thanks to emulating what he has seen from James and Chris Paul.