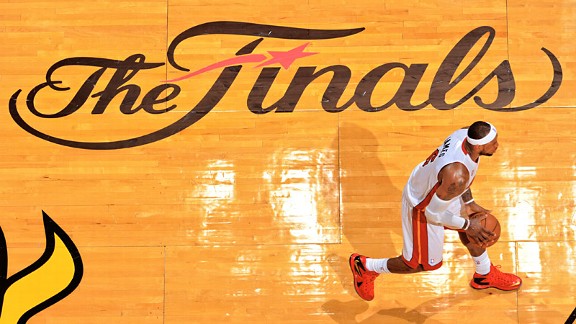 The Spurs almost won a title by surprising LeBron James with a defensive innovation: space.A sport can change dramatically just because one man decides to do something no one else thought of.

Bill Walsh pretty much invented short timing routes in pro football, for example. The concept of throwing to spaces before a receiver arrives seems obvious and intuitive to modern football fans, but it wasn’t always so. If your entire concept of quarterbacking had been based on “finding the open guy,” then it’s a powerful article of faith that a quarterback must wait for his receiver to be open first. Wait for the guy to get free then throw it. Chucking to the mere promise that the receiver gets somewhere? It sounded pretty risky until Walsh’s West Coast offense steamrolled the competition.

It’s difficult to break tradition and attempt something completely new in almost any profession. Perhaps it’s even harder in a profession where you’re asking groups of men to physically act out your wacky idea on a court or field. Imagine gathering a team together and selling it on a strategy it's never conducted or faced before. Tough sledding, even for a coach with steely charisma. There’s also the stigma that comes with bucking The Way Things Are Done.

Think of the grief Mike D’Antoni’s offensive methods get, years after much of the league adopted said methods. Most coaches, across sports, simply go with what they’ve known, never daring to dramatically experiment.

This means, not to sound all TED talkish, that creativity could be the ultimate market inefficiency. The NBA is headlong into this era of increasingly advanced stats. Teams will benefit from gathering better information, but the data can’t always reveal things people aren't doing yet but should. Let’s say no one had thought up the Eurostep before Manu Ginobili tried it one day. (Sarunas Marciulionis and Elgin Baylor predate Manu’s Eurostep, but this is a slight hypothetical.) I’m not certain there’s an analytical means for reaching the conclusion that, yes, you should definitely zigzag with your two steps toward the hoop. Today, the analytics can reveal the advantages of Eurostepping, but you need that first guy to try it out.

This could happen at any time.

Speaking of Manu, I wonder if the San Antonio Spurs have stumbled on a revolutionary way to play defense. After deciding not to guard Tony Allen in the Western Conference finals, they amplified the strange by treating LeBron James somewhat similarly in the Finals.

LeBron wasn’t guarded on the perimeter as he dribbled, despite coming off a regular season of shooting 40.6 percent behind the arc. Erik Spoelstra later expressed shock over seeing his superstar subjected to the "Rondo Rules,” a system of defense typically reserved for horrid shooters.

More shocking than the plan itself was that it worked, at least until Game 7, when James finally took advantage of open outside shots. Perhaps LeBron, a playmaker by nature, was thrown off by a defense that begged him to ignore his teammates and shoot early in the shot clock. Since the Finals, a popular fixation on Gregg Popovich’s Game 6 benching of Tim Duncan came to obscure the story of how San Antonio found great success this postseason in paradoxically not guarding people.

Despite this, it’s common for perimeter players to be closely guarded as they dribble, just in case they hoist. It’s possible that dribbling players are, in general, guarded far too tightly. It’s also possible that, and here’s where advanced stats can help, certain players actually shoot worse when wide open.

Can not guarding be the new guarding?

Even if this Spurs tactic was just a one-time gimmick, there’s some other sport-warping strategy out there, waiting to be discovered. There are so many possibilities with 10 moving parts constantly in flux. You could see an offense even more predicated on alley-oops than last season's Denver attack. You could see a team offense based mostly on a series of choreographed pass fakes. You could see, as Henry Abbott has covered, teams that just ditch the center position all together. Three-point hook shots? Everyone setting screens with their back like Tyson Chandler does?

Whatever finally does change the game will seem as obvious in retrospect as it was influential at the time.