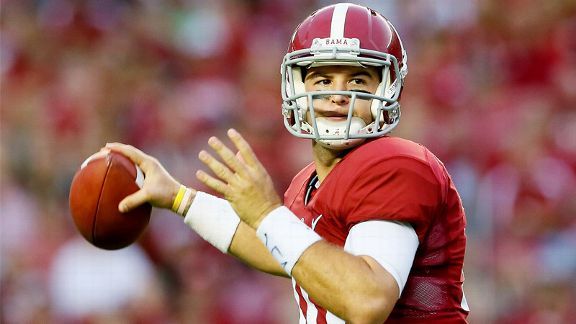 AJ McCarron quietly had the best statistical month of his career.

He completed nearly 71 percent of his passes during October and had 10 touchdowns and no interceptions in 99 attempts.

It was the fourth-highest touchdown percentage for any FBS player with at least 70 attempts and tied for McCarron’s most touchdowns in any four-game stretch during his career.

McCarron has been playing virtually mistake-free football. Since Oct. 1, he is the only FBS quarterback with at least three starts who has not been sacked, and he is one of five such quarterbacks who have no turnovers. McCarron and Middle Tennessee’s Logan Kilgore are the only players in the last three seasons to throw 75 passes in a month without being sacked or intercepted. Kilgore did it last November.

Arguably the most important thing McCarron has done was keep Alabama out of negative plays.

The Tide have an FBS-low nine plays that lost yards since Oct. 1. McCarron was under center for only one of those plays, a screen pass for -2 yards to Amari Cooper against Tennessee.

McCarron has started games strong during this stretch. His five first-quarter touchdowns since Oct. 1 are tied for the fourth most in the FBS.

If he continued his first-quarter pace for a full game, he would average 369 passing yards and five touchdowns. His best performance came in his last game, when he completed 9-of-12 attempts in the first quarter for 131 yards and two touchdowns against Tennessee.

The key to McCarron’s recent success has been improved play on third down. His 98.5 third-down Total QBR since Oct. 1 ranks second in the FBS behind Winston.

AJ McCarron on 3rd Down - This Season

Best in the game?

If you put it all together, the result is an FBS-high 92.5 Total QBR for McCarron since Oct. 1. He posted a Total QBR of at least 85 in each of his four games during that stretch.

Florida State’s Jameis Winston is the only FBS player with a longer such streak this season (5 games).

To be fair, McCarron has not faced a defense ranked in the top 50 of the FBS in points per game since Week 1 against Virginia Tech. In that game, he posted a season-low 23.4 Total QBR. McCarron will get his second crack at a top 50 defense Saturday with No. 13 LSU coming to Tuscaloosa.

If McCarron can continue his excellent play of late, he might start to make some noise in the Heisman race.