By Karl Ravech
ESPN
Archive
Look around baseball right now, and the Rays, Cardinals, Padres and Twins started the day Sunday leading their respective divisions. Texas, meanwhile, leads the AL West, a division in which the last-place team, Seattle, has a .393 winning percentage. The only division in which every team is playing better than .400 baseball is the NL East. The last-place Nationals are only four games under .500, and they have Stephen Strasburg reporting for duty on Tuesday. Within a very short time, the NL East will be baseball's premier division, surpassing the AL East. Baseball in Washington was, once upon a time, a big deal. The original Senators won a World Series in 1924, and teams twice left Washington to become other franchises. The Minnesota Twins and Texas Rangers trace their roots right back to the nation's capital. The current club traces its roots north of the border. The Montreal Expos became the Washington Nationals in 2005. Two years ago, the Nats moved into their new park. Now, over the next 48 hours, beginning with Monday's almost certain drafting of 17-year-old phenom Bryce Harper and Tuesday's debut of Strasburg, the Nationals will cement their status as relevant players in the NL East. Barring injuries, they will stay that way for years to come.
[+] Enlarge 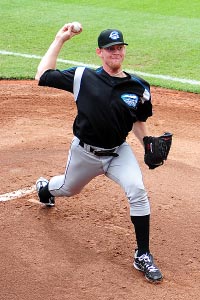 Andrew Weber/US PresswireStephen Strasburg's arrival to the majors Tuesday only makes the Nationals strong -- and the NL East a bit deeper.
And look at the rest of the division … the Phillies have Roy Halladay at the top of the rotation and position players locked up in key areas for the next three seasons. General manager Ruben Amaro has proved to be capable as a GM, and the fan base is as well established now as any in Boston or the Bronx. The Phillies are not going anywhere for the foreseeable future. The Braves have proved to be, if nothing else, resilient. Yes, this is manager Bobby Cox's final season, but as long as John Schuerholz is running the show, they will be successful. The Braves have the best young position player in baseball in Jason Heyward and a very good young pitcher in Tommy Hanson to build around. The Marlins have Hanley Ramirez, who, in light of his public issues earlier in the year with manager Fredi Gonzalez and subsequent sit-down with Andre Dawson and Tony Perez, should be a stable force for years. Mike Stanton has been called up. Josh Johnson is at the head of a good young staff. Most importantly, the Marlins will be in a new ballpark in 2012, which translates into more revenue, which in baseball terms means better players and bigger names. What do you say about the Mets? The team spends money, it's just it has been devastated by injuries. Given the fact they are the Mets, and they need big-name players and play in New York, I believe they do everything to stay competitive. In the short term, that might mean changing the manager or general manager. Bottom line is, given the economic hit the Wilpons took in the Madoff scandal, they're on the hook for a big part of their own ballpark, so they can't afford to have empty seats for very long. The Mets are one of only a handful of teams that have to succeed on the field to be financially successful for the owners off the field. Considering the media markets within the division -- New York, Washington and Philadelphia -- combined with the energy a new ballpark and great young players will create in Florida, the National League East will be the most competitive, exciting and dynamic division in baseball for years to come

Karl Ravech is a host for "Baseball Tonight."

Phillies starter Cole Hamels should be well rested. The lefty pitched only two-thirds of an inning his last time out thanks to an early rain delay against the Braves. The start was, however, long enough for him to earn his second consecutive loss. In two-thirds of an inning, he allowed two hits, two walks and three runs.

The Reds' Johnny Cueto is coming off his worst start of the year. After four consecutive wins, Cueto gave up 10 hits and eight runs against the Cardinals, but he snuck off with a no-decision. The righty has not lost since April 24, going 5-0 with a pair of no-decisions.

Carlos Monasterios has slipped into the fifth spot in the Dodgers' rotation, and he has handled himself nicely in three starts. Over his past two starts, he has permitted only two runs over 10 innings, winning one game and getting a no-decision in the other. The Dodgers won both games, the second a 1-0 victory at home against the Diamondbacks.

Jaso went 3-for-5 with a homer, five RBIs, two runs scored and a walk in the Rays' 9-5 win over the Blue Jays. Batting leadoff, Jaso had gone four games without a hit before breaking out Sunday for three hits, which raised his batting average back to .307 after it had dipped to .292.

Werth struck out three times in an 0-for-5 day in an extra-inning loss at home against the Padres. Werth is 3-for-30 since May 25, and his batting average has taken a dive, falling from .327 to .284. He has struck out at least three times in three of his past nine games, and one of those was a four-strikeout day against the Marlins.

As Tim Kurkjian writes in his column, Chipper Jones is a unique player. Not only has he starred for the team that drafted him No. 1 overall but he has stayed with that team for his entire career. And isn't that what you're looking for with the first pick, a player to build your franchise around? So this got us wondering, is Jones the "truest" franchise player? In other words, of all the No. 1 picks of all time, has he delivered the most value to the team that drafted him? Let's find out.

To figure this out, we are going to add up the total number of wins above replacement (WAR) each No. 1 pick produced for the team that drafted him. Adrian Gonzalez, for example, has been a very valuable player, but he has produced almost all his value for the Padres, not the Marlins, the team that drafted him. With that in mind, here are the five players who have produced the most WAR for the club that drafted them. 5. Harold Baines, 30.3 WAR, Chicago White Sox, No. 1 pick in 1977
Baines was a consistently above-average hitter, as his wOBA never dipped below .333 in either of his first two stints with the White Sox. For a time, he was a decent defensive right fielder, but never great, and he spent the last 10 years of his career primarily as a DH. As such, he topped 5.0 WAR in a season only once, in 1984, when he hit 29 HRs with a .304/.361/.541 line. He was a lock for between 2.0 and 4.0 WAR for 10 years. As a consistently above-average player, Baines was quite valuable to the White Sox, but his age and lack of defensive value hurt him later in his career, when he split time between Chicago as well as Texas, Oakland and Baltimore.