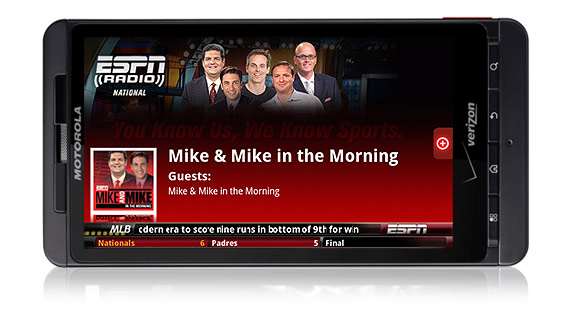 Over 17 stations and more than 40 podcasts now available

The ESPN Radio app is currently available and includes:

• Podcasts & Audio: An audio simulcast of the ESPN2 and ESPN.com Sunday morning show Fantasy Football Now plus over 40 ESPN Radio podcasts available including The B.S. Report with Bill Simmons, Pardon The Interruption, Around The Horn and the award-winning podcast original, Fantasy Focus Football.

• Popular ESPN Radio Shows: Access to live audio from fan favorite shows like Mike & Mike in the Morning, The Herd with Colin Cowherd, The Scott Van Pelt Show, Mason & Ireland and many more.

• Text Messaging: User can send a message directly to the studio of an ESPN Radio show.

• Programming Alerts: Listeners will be able to receive alerts for up to the minute breaking news.

The ESPN Radio app on Android devices adds another mobile platform with access to audio from ESPNRadio.com, the world's most listened-to online audience stream of any terrestrial broadcaster in the world. It averages more than 793,000 unique listeners per month, according to Ando Media, which measures nearly 7,000 global streams of audio worldwide.

Additionally, ESPNRadio.com is the largest, most listened to talk format stream, both terrestrially and via Internet-only streaming. It generates 3.9 million total sessions per month and the average session in ESPNRadio.com's audio stream lasts 1.24 hours.

The player hit a global milestone by logging in the largest concurrent audience ever to a single stream according to Ando Media. The player peaked at 180K listeners connected to the 2010 FIFA World Cup U.S. vs. Algeria match, nearly doubling its previous record for the U.S. vs. Slovenia match. The stream boosted ESPNRadio.com for the month of June to its most listened-to month in its ten year history of streaming with nearly 12.2 million total sessions and over 10.7 million total listening hours.